Posted in: Disc Reviews by Gino Sassani on October 7th, 2016 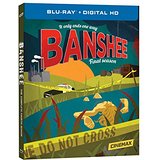 “Did I miss anything while I was gone?”

Did you ever. Banshee came to an end with this, the fourth season, and it did not go quietly, to be sure. But it’s not how it ends, but how this final season begins that’s a bit of a mystery. There is a time jump of a little over 18 months that will cause you to feel like you might have missed something. If that doesn’t confuse you, the season’s constant tripping around in time will turn this season into a show very different from the Banshee we’ve come to know and love. It’s not just one or two timelines that are presented here. The time can shift by any number of days, weeks, or months. Still the “current” story takes place nearly two years in the future. Fans appear to be divided on the season’s dramatic departure from the show’s style. The question has to be whether the team knew it was their final season from the beginning and felt the need to cover more ground to tell what story they had left to tell.

Banshee is one of those improbable plots that finds a way to pull us into the action all the while ignoring how unlikely any of this might really be. Of course, we do that all the time. It’s certainly unlikely we’re going to face a zombie apocalypse or run into a super-powered hero. That’s a different kind of unlikely. This kind of real-world fantastic is usually a bit harder to accept. Credit folks like Allan Ball for keeping us engaged with some of the most entertaining sleight of hand on television. You absolutely can’t start with the final season, of course. There’s too much “must-know” build up here. You can get caught up on the characters and first three seasons here.

“Just like old times, except no one’s bleeding … yet.”

It’s 18 months since the siege that ended the third season. Hood (Starr) has been living like a mountain-man hermit in the foothills in a cabin owned by Proctor (Thomsen). Of course, Proctor doesn’t know he’s there. You won’t recognize Hood when Banshee’s new Sheriff Brock Lotus (Servitto) shows up with some disturbing news. Rebecca (Simmons) has turned up dead, the apparent victim of a serial killer who has killed four women in the town. It’s an ugly satanic ritual killing that you will get constant reminders of throughout the season. Her body is flashed several times an episode, so it will be quite hard to forget. Apparently both Hood and Proctor are “persons of interest”, and Hood’s being taken into the new sheriff’s station. They’re no longer in the abandoned car dealership. Now they have swank new offices and a larger staff. It’s all courtesy of the town’s new mayor… Kai Proctor. In the past he just ran City Hall; now he is City Hall.

Hood slowly brings himself back to civilization. He shaves his Grizzly Adams beard and starts his own investigation into the murder. Proctor, not happy that Rebecca had a relationship with Hood, is nonetheless willing to “partner” with him so that he can get revenge on the killer. It’s an uneasy alliance, at best. The serial killer has also gotten the attention of the FBI. Enter Special Agent Veronica Dawson, played by Joss Whedon favorite Eliza Dushku. She’s not your typical agent. She likes her crack pipe, and she also decides to form an alliance with Hood to track down the killer. Of course, all of this is one big headache for Brock, who is enjoying the fact that he’s finally the top cop in Banshee.

Job (Lee) is still missing, and Hood’s return from his mountain retreat is not looked upon warmly by his former team members. They both blame him for giving up on Job, who was kidnapped at the end of the previous season. For Carrie it has become almost an obsession, one she sates by also acting as a Black-Canary-like vigilante in town. It’s the worst-kept secret in Banshee, but she’s been hanging around court sessions to take out guys who manage to get off in court. Meanwhile, Sugar (Faison) has been lying low in the bar. Unfortunately, this is the change in the season’s style I like the least. There isn’t going to be any real getting the band back together. You’ll absolutely miss the chemistry that this foursome always provided. Even when Job gets back, and that’s no spoiler alert, trust me. But even when he returns, the group is now dysfunctional and will eventually go their separate ways. I missed that dynamic, and perhaps it made all of this time-hopping that much less tolerable.

It is in these flashbacks that we piece together the final days, weeks, and months of Rebecca’s life. Fans of Lili Simmons take heart. She might have turned up dead in the first episode, but the actress is a big part of the season thanks to the flashbacks.

In the end, these aren’t the characters that we know. This final season almost feels like something that was put together years later in one of those revival/reunion shows. The season never completely gets on track, and I get the feeling that the entire team was taken aback by the decision to end the show after the fourth season. They appear to have been thrown off their game, and the material suffers a little because of it.

Each episode is presented in its original aspect ratio of 1.78:1. The 1080p image is arrived at with an AVC MPEG-4 codec at an average 35 mbps. The high-definition image presentation is quite cinematic. It’s very hard to judge the actual quality. The filmmakers do a lot of different styles and filming techniques that highly vary things like sharpness, texture, and particularly color. That’s even more true with the addition of so many flashbacks. You have to get used to the storytelling here and learn which styles mean what things. Within that framework, I’d say we’re getting exactly what is intended.

You also get select commentary tracks and a couple of deleted scenes.

Banshee Origins: (26:09) Each of these chapters deals with a different show regular sitting in Sugar’s bar where the two have an intimate conversation.

The adrenaline ride is addictive. No matter how unbelievable the show got, I still couldn’t wait to see what happened next. The show attempted to take a comic-book approach to the storytelling, and while this was not based on any established graphic novel, it feels like it is. And, of course, the comics have already begun to follow. If you like stability in your story or characters, this one will not work at all for you; be warned now. If you can go the extra mile in suspension of belief and you don’t mind the relationship instabilities, the show certainly knew how to entertain. It may appear that four seasons just doesn’t fill out your video shelf when it comes to Banshee. I tend to agree, but “be grateful for what you do have”.

Gino Sassani is a member of the Southeastern Film Critic's Association (SEFCA). He is a film and television critic based in Tampa, Florida. He's also the Senior Editor here at Upcomingdiscs. Gino started reviewing films in the early 1990's as a segment of his local television show Focus. He's an award-winning recording artist for Omega Records. Gino is currently working on his 8th album Merchants & Mercenaries. Gino took over Upcomingdiscs Dec 1, 2008. He works out of a home theater he calls The Reel World. Favorite films: The Godfather, The Godfather Part II, The Body Snatcher (Val Lewton film with Karloff and Lugosi, not the pod people film), Unforgiven, Gladiator, The Lion King, Jaws, Son Of Frankenstein, The Good, The Bad And The Ugly, and Monsters, Inc.
Criminal Minds: Beyond Borders: Season 1 “31 Nights Of Terror” 6 Plots