“31 Nights Of Terror” OMG, We’re in a Horror Movie

Posted in: No Huddle by Jeremy Butler on October 9th, 2016 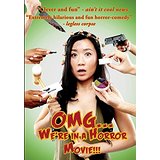 This movie is more likely to make you laugh than it is to scare you, so its place among the 31 Nights of Terror is borderline. However, with a title like OMG…..We’re in a Horror Movie, it goes without saying where it belongs. Six friends while indulging in their weekly board game ritual (I didn’t even know that was a real thing) find themselves inexplicably transported in the plot of a horror movie. Realizing that they have been relegated to the stereotypical roles of such horror movie characters as the token black guy who dies (though there are at least three black characters, so figuring out which one is the character is a source of entertainment), or the hot girl who dies in the shower. Most importantly, one of them is the killer.

Desperate to survive, the friends must figure out how to shed their stereotypical roles before the killer discovers his homicidal nature.

As I mentioned earlier, this is more of a comedy than a horror feel, but there are still a few moments that may make you jump. I’m saying that for the less experienced horror fanatic. For the seasoned veterans, it’s unlikely. That said, it is still a very enjoyable experience that I found reminiscent of the Scary Movie franchise, the earlier years with the Wayans family. Albeit cheesy in certain areas, specifically with a killer who identifies relatively quickly (or do they…).

I’m not particularly fond of parody film, but this one had potential, partly due to the fact that it called out that it was a horror movie from the beginning, which kept it from falling into the obvious pitfalls like the pretty girls die in the shower. In fact, the originality comes from the cast doing everything they can in order avoid their assigned circumstance.

A low-budget film, yes, but don’t let that discourage you from a worthwhile experience. As I said, OMG…We’re in a Horror Movie isn’t likely to scare you or have you biting your nails, but you will laugh. Ajala Bandele should be proud of what he accomplished; writing, directing, producing, as well as acting in the movie. Some people struggle to successfully do one role. He did four.

Jeremy Butler is a film school graduate of the International Academy of Design and Technology. He is been writing for Upcomingdiscs since 2012; however, movies have played a big part of his life for much longer. Favorite genres include horror, science fiction/fantasy, and comedy. Favorite movies are V for Vendetta, Boondocks Saints, Kiss Kiss Bang Bang, and The Godfather.
“31 Nights Of Terror” Masks (Blu-ray) Reign: The Complete Third Season