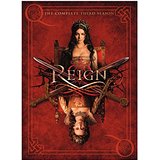 “There can only be one queen.”

After navigating treachery at every turn in French court and having to cope with a deadly plague throughout the first two seasons of Reign — the CW’s campy, compulsively watchable adaptation of the Mary, Queen of Scots saga — season 3 was meant to introduce Mary’s most formidable foe yet. Queen Elizabeth I of England becomes a regular character on the show and Mary’s chief rival from afar. But in telling the story of two warring queens (while trying to service the series’ many established characters) the show stretches itself too thin and loses some of the fizz that made it a guilty pleasure.

“They’re like two spiders in a jar. They can’t co-exist, they can’t let the other survive.”

Queen Elizabeth (Rachel Skarsten) was actually introduced at the very end of season 2, and she proceeds to be a constant thorn in the side of Mary, Queen of Scots (Adelaide Kane), who is still married to King Francis II of France (Toby Regbo) at the start of season 3. Unfortunately, Francis’ rapidly declining health means that Mary soon won’t have the might of France behind her to protect her home country of Scotland versus threats from Elizabeth, who also views Mary as a potential challenger to her throne. I can see the appeal of structuring season 3 of Reign as a chess match between Mary and Elizabeth that includes spies, strategic marriage alliances, and (since this is still a CW drama) not-so-strategic bed-hopping. Unfortunately, the background noise from the show’s supporting characters ultimately drowns out this potential clash of titans.

To be fair, some of those characters do pop. Catherine de Medici (Megan Follows) continues to be a scheming delight as Francis’ fiercely protective mother, who aligns herself with Elizabeth at the start of season 3. I also didn’t mind the grooming of Charles IX (Spencer MacPherson) — Francis’ young, not-ready-for-prime-time brother — as the future king of France…and a potential puppet for his wily mother. And I was pleased to see slimy nobleman Stephan Narcisse (Craig Parker, a season 2 addition) still prominently involved as he woos Mary’s former lady-in-waiting Lola (Anna Popplewell) and tries to grab power.

The problem is the show struggles mightily to cram in enough screen time in its 42-minute episodes for other longstanding characters, even though more than a few of them (shout out to Lady Kenna, and the lecherous King Henry II of France) have already been jettisoned. As a result, King Henry’s illegitimate son Bash (Torrance Coombs) — formerly the third or fourth most important character on the show — spends most of his time on the margins chasing a supernatural threat. Leith (Jonathan Keltz) is the kindly former kitchen servant who continues to rise above his station as he begins a tentative flirtation with Princess Claude of France (Rose Williams). Greer (Celina Sinden) is another one of Mary’s former ladies-in-waiting; she now owns a brothel and doesn’t have a ton to do until she is essentially phased out of the story towards the end of the season as Mary moves to fulfill her destiny in her homeland.

Of course, some of this separation between our protagonist and the show’s most prominent characters is by design, as Mary continues to learn the personal cost of ruling a country. But for a show that bears only a passing resemblance to actual history and relies heavily on soapy connections, season 3 is kind of an unwelcome downer. Simply put, the show — from its clunky, exposition-heavy writing to direction that looks hopelessly minor and quaint compared to other TV period dramas at the moment — isn’t good enough to simply be a show about scheming royals.

The first handful of episodes of season 3 are promising as the show prepares to say goodbye to Francis (they probably feature Regbo’s strongest work on the show), and the last three episodes provide a fresh jolt as Mary sets out to rule a land she hasn’t set foot in since she was a very small child. But everything in between feels like a mish-mash of double-crosses and botched alliances. It’s a bad sign that the show feels flabbier than ever, considering that the 18 episodes of season 3 are fewer than the 22 episodes Reign produced during each of its first two seasons.

The most notable misfire, however, is Elizabeth. Skarsten (at least thus far) simply doesn’t command the screen as forcefully as this legendary monarch should. And while I can appreciate the show drawing parallels between Mary and Elizabeth — like Mary in seasons 1 and 2, Elizabeth must fend off multiple marital prospects and navigate a secret affair — it ends up feeling a bit “been there, done that.” Kane still manages to be a strong, alluring center for the show, but her impact is inevitably lessened by having to cede so much screen time to Elizabeth. I did enjoy the fact that Mary and (her actual most formidable foe) Catherine de Medici spend a decent chunk of the season on the same side. (Though Catherine can’t help herself and makes a threatening play for the French crown by season’s end.) And to be clear, there’s still some fun to be had in Reign courtesy of a sex horse mishap and the show’s orchestral covers of pop songs. (Season 3 offers Vitamin String Quartet’s take on Elle King’s “Ex’s and Oh’s” and Sam Smith’s “Stay With Me.”)

Reign: The Complete Third Season features all 18 episodes on four discs. There are no special features included in this set, which is a first for Reign home video releases. The show has been renewed for a fourth season, which is set to premiere next year. (Marking the first time Reign has been pushed out of its fall slot.) Big changes abound for this series, and it’s not just because one of the characters who had been with the show since the beginning lost their head in the season 3 finale. I actually feel like season 4 could represent a much-needed reboot for the show as Mary tries to navigate her new surroundings. Unfortunately, that means season 3 of Reign represented an awkward (if necessary) transition period.