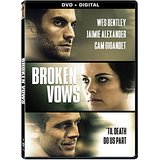 Everyone makes mistakes. Decisions that are made in the heat of the moment that haunt them and they wish they can take back. Sometimes those mistakes don’t go away as easily as they want to them to. That is definitely the case for Tara (Jamie Alexander) after her bachelorette weekend in New Orleans. Looking to celebrate her impending wedding as well as forget an indiscretion committed by her soon-to-be husband (Cam Gigandet), she meets Patrick (Wes Bentley), a bartender at a club Tara and her friends go to. They meet, there’s a connection, and as these things go, one thing leads to another, as they say. Afterwards, she just wants to move on and forget it happened, but Patrick will not be ignored (I know it is an obvious rip-off, but it applies).

This thriller is definitely a welcomed addition to the 31 Nights of Horror. Granted it does not feature a seemingly immortal killer, but more of the human variety; it goes without saying that human beings have the capacity for great violent and psychological acts. Patrick is no different as he begins a barrage of tactics to achieve his objective including cancelling wedding reservations, showing up unannounced, even embedding himself in Tara’s life thorough people close to her. Tara goes to extremes as well, doing anything and everything to rid herself of her stalker and keep her secret from Michael.

The leads fits their roles perfectly in my opinion. Wes Bentley is a bit typecast, as this is not his first rodeo as a psycho killer (P2, anyone, and there have been others). That said, he does not phone in his performance, and it is evident why he was chosen for the part of the methodical Patrick. That intense stare says it all. You also can’t help but feel for Jamie Alexander, who is our eyes into the story. She is merely a wronged woman who in a moment of weakness allowed her to succumb to a desire that will later bring her nothing but shame and regret. Like Bentley, her shame and regret is palpable with every glance.

On the other hand, the suspense does take a bit long to build properly. One scene that failed to shock me was the long sequence of Tara arriving home to a glass of wine, and making her way through her house to her shower to surprise her paramour only to get a shock of her own. It just lacked build up in my opinion and the right type of background music to deliver the necessary shock value. I saw the conclusion coming the moment she entered the house. However, that is my only really issue with the suspense. The rest unfolded itself quite well, especially when Patrick cancels all the wedding reservations.

In conclusion, Broken Vows is a welcome addition to the 31 Nights of Horror purely on the merit of the suspense. This movie is likely to cut down on committed people engaging in extramarital affairs on account of the possible consequences that may follow. Does that also make it a public service announcement?

Jeremy Butler is a film school graduate of the International Academy of Design and Technology. He is been writing for Upcomingdiscs since 2012; however, movies have played a big part of his life for much longer. Favorite genres include horror, science fiction/fantasy, and comedy. Favorite movies are V for Vendetta, Boondocks Saints, Kiss Kiss Bang Bang, and The Godfather.
“31 Nights Of Terror” Contest: Win The Curse Of Oak Island Season 2 On DVD “31 Nights Of Terror” The Caretaker