“31 Nights Of Terror” The Caretaker

Posted in: No Huddle by Brent Lorentson on October 17th, 2016 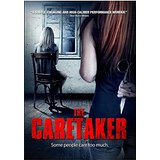 When it comes to director Jeff Prugh and his new film The Caretaker, he shows that you don’t need a big budget or grand effects to deliver a horror film.  In the case of The Caretaker, filming on a modest budget may have presented the director with the challenge to lean more towards atmosphere and technique rather than fall back on special effects and gore. This isn’t a film that is going to get a wide release in theaters across the US, so it’s going to have to rely on receiving word of mouth to be seen.  With there being so many options to choose from, what makes The Caretaker stand out from the pack? Well, if I’m being honest, it’s because I find the film charming in a way.  Not exactly what a horror film would want to have said about it, but this is one of those little films where you can actually feel the labor and passion put into this.

Mallorie (Meegan Warner) is called upon to take care of her ailing grandmother; her boyfriend August (Sean Martini) tags along, and it’s not too long before things start to get a little weird.  The grandmother, Birdie (Sondra Blake), seems to have a deep attachment towards her home. Most with grandparents are familiar with the type that want to remain independent and not be locked away and forgotten in a home.  At first glance Birdie is a very familiar figure and we can understand the need for someone to look after her with her health in decline, but the film doesn’t waste time in giving us the impression something just isn’t right with old grandma Birdie.

The film remains very self-contained and is smart to never really stray from the home, which helps give the viewer a very anxious feeling.  It helps that the location is beautiful yet has a very genuine lived-in feeling that doesn’t make it hard to believe there is a lifetime of stories hidden within its walls.  With Mallorie’s presence in the home it seems to have triggered more memories in the home, as we start to see flashes of violence that has occurred in the home, and it would like Mallorie to remember certain events of the past.

Does Birdie want to kill her granddaughter, or is this all some hallucination by Mallorie, who suffers from nightmares and sleepwalks? It’s the question that the viewer has to juggle along with August as he attempts to be the supportive boyfriend during this stressful time.

There is a lot of creepiness and potential going for the film from the start, and as it plods along, it unfortunately gets to be a bit tiresome.  The problem with the film is it feels like it was a short film injected with many filler scenes to make it a feature length film, and yes, the film suffers greatly for it.  The bookend portions of this film work well, but the middle fat just drags it down to the point that any viewer catching this on TV would simply change the channel.

I appreciate the practical effects, and basically every scare we see is all done in camera despite a sound cue for a jump scare. I love the effort put into each of the shots to give this an authentic creepy atmosphere instead of being some slick polished film. It does so many things right in attempting to give us a creepy haunted house film that it frustrates me that it never quite achieves what it’s attempting.

Brent Lorentson is a horror writer and film critic based out of Tampa, Florida. With a BA in Digital Film, he co-wrote and co-directed Scavenger Hunt. His short stories have appeared in various horror anthologies. In 2019 his short script Fertile Blood will be a part of the anthology horror film Slumber Party. He is currently working on his first novel A Dark and Secret Place set to be released in late 2019. Favorite Films: Taxi Driver, Fight Club, I Saw the Devil, The Wild Bunch, Dawn of the Dead, A Clockwork Orange, Pulp Fiction, Heathers, The Monster Squad, and High Fidelity.
“31 Nights Of Terror” Broken Vows Denial