Posted in: The Reel World by Archive Authors on October 18th, 2016 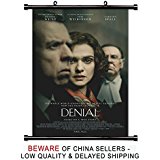 David Hare is an extremely prolific and ambitious playwright. He has written over 30 plays, but he has also done television and screenplays as well as directing in all three mediums. One of his first screenplays was an adaptation of his play, Plenty, which starred Meryl Streep, in 1985. He also wrote the screenplay for an adaptation Michael Cunningham’s Pulitzer Prize-winning novel, The Hours, which starred Meryl Streep as well. He also wrote the screenplay for The Reader, which was nominated for numerous awards and was about a woman guard in a German concentration camp and starred Kate Winslet. It should also be noted that he has been nominated and won awards in all these media and was also knighted in 1998. But David Hare is first and foremost a great playwright, and his meticulous ability to mold character nuance is legendary.

Denial is a true story based on the book History on Trial: My Day in Court with a Holocaust Denier by Deborah E. Lipstadt. Lipstadt (Rachel Weisz) is confronted at one of her lectures by David Irving (Timothy Spall) and insists he has been libeled in her books. Irving had written numerous historical books from 1963 to 1996. In the beginning, Irving’s work was highly regarded by many but controversial because of his unduly high favoritism of the Third Reich. By 1996, when he confronted Lipstadt, he was perceived as a racist. He brought suit against Lipstadt in England for libel. The movie primarily focused on the preparation for the trial and the aftermath. In fact, the movie spends most of its time trying to vacillate between truth, delusion, and confusion. The legal system is in fact a perfect illustration of this idea, because truth and logic are not necessarily the best way of winning. Lipstadt’s solicitor (who with her barrister makes up one half of English legal defense team) insists that she not testify even though he completely supports everything she says about Irving. The strategy means that allowing Irving to actually question her would validate the ridiculous notion of denying the holocaust. The film becomes an examination of how to defeat people who are delusional. The film is maybe one of the best examinations of the inner workings of preparing for a defense case since Reversal of Fortune in 1990 about Claus Von Bulow. We live in an anti-intellectual age where many falsehoods and half-truths are widely circulated in the media. This movie is rigorously intellectual about how most people will support ideas they know are false or rationalize positions that are embarrassing.

Irving maintained a diary of millions of words which was an enormous challenge for the defense team but also an opportunity to examine his mendacity and racism. The case hinged on the idea that his books were in fact deliberate lies based on his growing personal racism. They had to show that he lied to put forth a belief that Nazism was deliberately made to seem worse than it was.

The cast is amazing including Tom Wilkinson (Batman Begins, The Exorcism of Emily Rose), Rachel Weisz (The Mummy, The Mummy Returns), Timothy Spall (Harry Potter and the Deathly Hallows, Part 1 & 2), but it is the writing of David Hare that is the real star.