Posted in: No Huddle by Archive Authors on October 19th, 2016 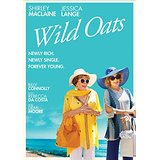 Shirley MacLaine and Jessica Lange are two great women of American film, and living legends. It is always a pleasure to see them work. They both have won shelves of awards including Best Actress Oscars. But they both have also been in bad movies. The process of being a creative artist is always a journey where you take a leap through a hoop with the hopes of doing good work. It also becomes difficult for actresses, even for living legends, to get good work as they grow older. But films about older people are important too. All movies can’t be about young attractive new faces being forced on you with little understanding of who they are. We all know who Shirley MacLaine and Jessica Lange are. They are part of our collective history. They are like our family. It makes us feel good when they keep going and do good work. Lange especially has been hitting career highs with her recent work on multiple seasons of American Horror Story. Lange has won numerous awards for that alone. But eventually it is time to move on to new risks. I forgot to mention that Demi Moore is also in this movie.

Wild Oats is a movie that premiered on the Lifetime network. That can be perceived as a bad sign, but it doesn’t necessarily have to, in a case like this. In this case, it is an opportunity to showcase a type of film that doesn’t get made much anymore; films that celebrate old age. It is also a film that went through numerous difficulties getting made. It had so many difficulties getting made that Shirley MacLaine wrote a book about it. It’s called Above the Line and is the latest in a long line of bestsellers written by MacLaine.

The film was directed by Andy Tennant, who has a number of hits under his belt like Hitch and Sweet Home Alabama, but this film is not in that box office category, and that probably is because kids don’t watch movies about old people. I actually wish that films about old people did far better at the box office. It makes sense to me, since the largest segment of the population by far is over the age of 65, but that age group clearly can’t be bothered to go to movies.

Wild Oats is actually pretty funny but is also pretty trivial and silly, but it’s not a bad thing for a comedy to be trivial and silly. I’ll tell you how silly. Both Jessica Lange and Shirley MacLaine have wild, passionate nookie in the movie. Nookie is kind of an old phrase, but you can google it.

The plot summary is simple. Eva (MacLaine) gets a life insurance check with too many zeroes ($5,000,000 instead of $50,000) and after a few second thoughts runs off to the Canary Islands, Spain (that’s the location that gave the largest tax rebates). They are pursued by an elderly insurance investigator, Vespuucci (Howard Hesseman, who is barely recognizable from his WKRP in Cincinnati days). They run into numerous hijinks involving among others actors Billy Connolly (Boondock Saints I and II) and Matt Walsh (Veep).

Even if both these great divas embarrassed themselves somewhat by doing this movie, I would like to see more movies like this made. Power to the divas!