The Legend of Tarzan (Blu-ray 3D)

Posted in: Disc Reviews by Brent Lorentson on October 19th, 2016 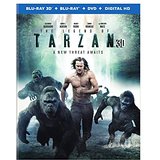 I’ve always been a fan of Tarzan; I loved the old series and the films basically because I just dug how he was this fearless character who lived in the jungles who fought the bad guys and a few wild animals as well.  As I got older that was when I discovered the books of Edgar Rice Burroughs, and I just had a blast with all these pulp tales about the civilized Wildman and the beautiful Jane.  I even remember how excited I was about seeing Greystoke: The Legend of Tarzan as a kid; even though this screen adaption bored me to tears, it was still exciting to see the character up on the screen. Now it’s 2016, and the character is swinging into action on the big screen again, and with a large budget to back it up.  The trailers had me excited; everything seemed to look how I always hoped a Tarzan movie should be. Did the film manage to meet my expectations?  Well, it came close, and the result is a film that shows how the wrong director can ruin a great story.

The casting of Alexander Skarsgard is just about as good as you can hope for in casting the role of Tarzan/ John Clayton.  It’s absolutely vital how important it is to get the physical look of the character and make it believable that he can be stealthy, as well as a brute force who can fight giant apes and crocodiles but still look the part of a British lord. Sure, many audience-goers will enjoy the numerous shirtless scenes the film offers, but it makes it all the more believable when we see the character pull off some superhero-like scenes.  When it comes to the casting of Margot Robbie as Jane, she is a knockout here.  She plays this damsel (not so) in distress in such a charming loveable way that it’s clear that by the end of summer following the release of Suicide Squad she will be the A-list actress off Hollywood.  She brings so much life to Jane that you can understand why Tarzan will do just about anything for this woman, and when they are together it’s a chemistry that has me hoping so much that we’ll get more adventures of Tarzan and Jane.

But what about the movie; is it any good?

What’s great is that this is not yet another origin film.  Instead Tarzan has long been civilized and has become a bit of a sensation.  His adventures and exploits have been told and written about, but John Clayton wants to be rid of the shadow of Tarzan that has followed him from the jungles and instead wants to be a loving husband to his wife, Jane.  What threatens to bring Clayton/Tarzan back to the jungle is Leon Rom (Christoph Waltz), who has been sent by King Leopold to find rare gems and in the process turn the natives into slaves.  With a little convincing from George Washington Williams (Samuel L. Jackson), who simply wants to protect the natives, Williams eventually gets Clayton to return to the jungle to ensure the safety of the natives.

A lot of the film feels more like a middle entry of an established franchise, which may bother some, but the time saved helps give us a more developed story; unfortunately it has an all-too-generic villain in Waltz.  What’s more frustrating is knowing Waltz is a better actor, only it seems this is yet another rendition of him playing a villain, and it’s a villain who just lacks anything resembling menacing.

What gets even more frustrating is that when we do finally get to see Tarzan in action, the fight choreography and simple film direction is just dull and flat.  For example, there is a moment on a train car where Tarzan fights several soldiers; the tension builds up for a great fight, but when it occurs, it has about as much excitement as watching ice melt on a summer afternoon.  If it was just one scene that was a letdown, maybe it wouldn’t be such a big deal, but the entire film went like this, and I throw this blame upon the shoulders of director David Yates. All the exposition in the film plays fine, but when it comes to the action/adventure aspects of the film, it simply brings this film down.  What makes it worse is there are some pretty awesome sequences laid out here that in the right hands would have blown the minds of filmgoers.  The buildup in the trailer where we see Tarzan face off with a gorilla starts off so promising; then it just implodes with an overwhelming dose of unoriginality.

By the time the climax of the film occurs and we finally get some decent action beats, it’s too late, and even this felt too easy.  Where are the raised stakes in this film?  The film cost close to 190 million dollars, and with the amount of CGI, I can’t help but wonder where it all went.  Remember how people felt about Shia LaBeouf when he swung along vines in the last Indiana Jones film? Oh geez, get ready to cringe, because that is just about what we get here with the Tarzan vine-swinging scenes.

But if the CGI doesn’t frustrate you, there is the color grading here that has me wondering if the post-production artists had been told this was actually a new Underworld film they were working on.  Heavy greys and blues overwhelm the look of the film as though it’s been through a bleaching process, and even the bright colors of the jungle have been dulled.

This is so frustrating, because this could have been a great film. I don’t mean to armchair-quarterback this one, but at one time Craig Brewer (Hustle and Flow) was attached to write and direct this.  His name is still attached as a writer, and I just wonder what could have been, with a filmmaker who really had a passion for the project. Granted, I don’t know how much of the script is true to what Brewer originally brought to the table, but the story is pretty entertaining.  I mean, this has the Tarzan I’ve been excited to see for so long, but the film just bumbles every exciting moment.  Yet somehow it’s still entertaining; I’ll give credit to the cast and script on this one.

The Legend Of Tarzan is presented in its original aspect ratio of 2.40:1. The high-definition 3D image is arrived at using the standard duel MVC codec at an average 19/10 mbps. The 3D does a rather nice job of bringing depth to the jungle without too many gimmick or poke shots. You do get a couple of them, to be sure. The 3D gives us a feeling that the jungle world does extend beyond the screen. Of course, there’s a ton of sharpness and detail here. The animals aren’t quite up to the quality of the recent The Jungle Book realism, but they were close. The nice Africa plates the crew shot stand out the most here. While the cast and film crew never left London, there were six weeks of establishing shots and plate work done. These vistas are truly a grand display on this release. Black levels are pretty solid in the shadowy darkness of the deepest jungle. There are times the film is overly bright with a bit too much on the yellow side. Fleshtones appear a little jaundiced at these times. Fortunately, most times they appear soft and natural.

The Dolby Atmos defaults to a 7.1. This one wasn’t as aggressive as I expected. There wasn’t near as much surround sound as the environments would suggest. That’s not to say there aren’t some pretty sweet moments. There are. The vine-swinging scenes offered the most immersive audio experience in the film. Dialog is spot-on, and there are some nice jungle ambients from time to time. The score pushes through at just the right moments. Subs give us a nice sound depth, particularly to the gorillas. When they beat on their chests or pound on Tarzan the thumps give you a nice little rumble.

Tarzan Reborn: (15:08) The cast and crew begin with a short retrospective on the character in the movies and their own childhood experiences with the material. The feature quickly goes into a bit of a synopsis blow-by-blow and reveals some behind-the-scenes material such as Skarsgard’s training for the role.

Battles And Bare-Knuckle Brawls: This three-part feature takes three action scenes and gives you a bit of a behind the scenes look at each. There is no play-all. You get:

Tarzan And Jane’s Unfailing Love: (6:01) Of course, this one looks at the relationship between the characters and the chemistry between the two actors.

Creating The Virtual Jungle: (15:15) This one gives us a look at the many aspects of the f/x used to bring the African jungle to London and ultimately to the screen. There’s a look at set construction, conceptual art, and many of the f/x layers that went into particular shots.

I really hope this manages to make enough and we can get a sequel, because I really want to see what Skarsgard and Robbie can do with these characters.  I’m not saying Yates is a bad director; I enjoyed his Harry Potter films, but he was the wrong choice for this film.  It’s an enjoyable film that kids will have fun with, but for those who are older, it will possibly underwhelm.

Brent Lorentson is a horror writer and film critic based out of Tampa, Florida. With a BA in Digital Film, he co-wrote and co-directed Scavenger Hunt. His short stories have appeared in various horror anthologies. In 2019 his short script Fertile Blood will be a part of the anthology horror film Slumber Party. He is currently working on his first novel A Dark and Secret Place set to be released in late 2019. Favorite Films: Taxi Driver, Fight Club, I Saw the Devil, The Wild Bunch, Dawn of the Dead, A Clockwork Orange, Pulp Fiction, Heathers, The Monster Squad, and High Fidelity.
Wild Oats “31 Nights Of Terror” Upcomingdiscs First Annual Halloween Decorations Contest