“31 Nights Of Terror” The Midnight Swim 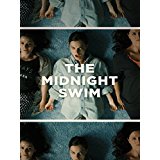 Yet another indie horror flick has come through the Upcoming Discs hub. Although, I wouldn’t necessarily categorize The Midnight Swim into the horror genre: it’s more of a dramatic mystery. That is not to say that the film did not have any unnerving moments, but the priority of the storytelling was to study the three main characters. In an effort to capture three very different personalities while simultaneously providing a lingering suspense, The Midnight Swim created a tension that resolved to my satisfaction. Ultimately, the film favored its character study more than it did its mystery, which hurt my enjoyment as a result.

Presented as a documentary-style “family archiving” activity, the film follows three sisters as they journey back to their childhood home after their mom has died in a diving accident. Annie (Jennifer Lafleur), the oldest, is portrayed as the most levelheaded sister, with hints of estrangement from her mother. Isa (Aleksa Palladino), the middle child, provides the film with an emotional free spirit and the most positivity through their trip. Finally, June (Lindsay Burdge), the “family archivist,” operates the camera and is the youngest and shyest of the three. As June films this vacation, the daughters begin to discover the mysteries of the lake that took their mother’s life.

The biggest issue the film has is its camera work. The character June is not presented as a professional, so why would we expect her skills of handling a camera to be pristine? Emphasizing her character traits of being young and inexperienced, any time she is “behind/holding” the camera, it shakes. A lot. Unless you really like the aesthetics of shaky cam (which seems to be popular among new documentary style filmmakers), this film will most likely get on your last nerve. It is very upsetting, too, because there are so many amazing static, contemplative shots of the lake that just resonated with me. So I know for a fact that whoever was actually filming knew how to make their sets look beautiful. However, that also means that the shaky cam I dislike so much was most likely done on purpose for the sake of “realism.”

Once you are able to look passed the dreaded shaky cam, you follow two separate stories: one concerning the daughters’ loss of their mother, the other concerning the daughters’ curiosity in their mother’s obsession with the lake she studied so much. Both stories are equally compelling, as they are both written very well. The character study is emotional and tumultuous, and the mystery is suspenseful and intriguing. However, placing them both side by side felt like it was a mistake. By the end of the movie, neither one of the stories comes to a satisfying conclusion.

This is most likely because too much mystery is shrouding the mother (Beth Grant), and it is never explained thoroughly. At one point, June calls her mother’s office to see if she is available, only to have the receptionist tell her what she already knew: she was dead. That scene came and went in less than a minute and ended up confusing me more than propelling me into mystery. It could be argued that she hadn’t quite accepted her mother’s death and is trying to ground herself in reality by having a third party (the receptionist) confirm the death, but her reaction is “sorry for your loss.” Unless you are fully aware that June absolutely needs that reassurance, this scene is incredibly confusing.

If the film had stuck to only one of the stories and incorporated more of the mother’s purpose, it could have been a three or three and a half in my book. There was so much that was done well within the writing of the characters and the writing of the mystery. I could have even forgiven some (not all) of the shaky cam. However, when they are combined, there were simply too many subplots to follow through the lens of the shaky cam.

Suddenly (Blu-ray) “31 Nights Of Terror” In Their Own Words: Interviews With Masters Of Horror