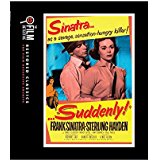 Frank Sinatra is a man of many talents, although I had never really paid much attention to his acting, as I had never actually seen him outside a musical. Anchors Aweigh and On the Town are among my favorite musicals. That being said, I have never watched a film where I have been fully attentive to Sinatra’s talents as an actor. While Suddenly has other big names like James Gleason and Sterling Hayden, I was surprised that the entire film had an incredibly rocky start without Sinatra’s presence in the first twenty minutes.

In the small town of Suddenly, the sheriff (Hayden) is contacted by the secret service, alerting him that the President of the United States will be making a brief stop in town, as a way to bypass the crowds of a larger city. The President is arriving by train, so the Sheriff is instructed to clear all the shop owners and home owners within the proximity of the train station. One home owner (Gleason) used to be a high-ranking secret service agent, so he is permitted to stay with his daughter and grandson. Eventually, a group of gangsters posing as FBI agents (led by Sinatra), show up to use the house’s location to assassinate the president.

As I said before, the film had a very rocky start, and I mostly attribute my disinterest to the acting of Sterling Hayden. I have seen him in much more engaging roles, but this sheriff is one of his worst performances. Acting styles differ from decade to decade, and in the 1950s actors had a certain cadence to their speech that modern method actors don’t practice. That being said, Hayden’s acting was incredibly boring, especially by 1950s standards. Everyone who interacts with him are lively and bring so much energy to their part, but he sucks the energy out of each scene until Sinatra actually enters the story.

Moving on to Sinatra’s role: I was very impressed by the complexities he demonstrates. He is a hardened gangster who has no problem taking a life for money, but he has always been somewhat conflicted about killing since he fought in the war. So not only is he an impressively intimidating villain; as the story progresses, his character’s motives slip from being in it for the money, to proving a false sense of honor, and then further into psychopathy. Not only was I impressed by Sinatra’s portrayal of the gangster, but I was also impressed by the complex writing that went into his character. As a matter of fact, I don’t think I have seen a production from the 50s that actually had a great character with more than one significant trait.

Sinatra’s capacity for villainy is tremendous. I’d like to find more films with him as an antagonist, because he alone could carry the weight of my enjoyment. When the majority of the set design and camera work felt cookie-cutter (as most films from the 50s do) I really look to the writing to be impressed. Suddenly impressed me enough to watch a second time, which I rarely consider when it comes to 40s-50s Hollywood films. At an hour and fifteen minutes long, I recommend watching this film just to see Sinatra’s complicated antagonist: it is interesting and won’t take too much of your time.