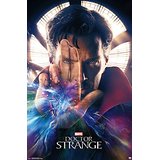 “Heroes like the Avengers protect the world from physical dangers. We safeguard it against more mystical threats.”

Back in 2008, Iron Man was entrusted with kicking off Phase One of Marvel’s Global Takeover Cinematic Universe. The film centered around an arrogant hero brought low who builds his own costume — and essentially creates his own superpowers — by scraping together spare parts in a cave. As the years have gone by and Marvel’s brand of superheroism has proven to be infinitely more bulletproof than comic book characters who are actually impervious to gunfire, the studio has earned the right to get a little Strange.

I guess you could say it started with 2011’s Thor, which made Norse mythology accessible to mass audiences by turning it into a Shakespeare-lite romp. (It also trained us not to snicker when we heard the word “Asgard.”) Marvel’s first major risk, however, came with 2014’s excellent Guardians of the Galaxy, the studio’s first foray into deep space with a motley crew of characters who were largely unknown to mainstream moviegoers. (I’d also argue that last year’s Ant-Man represented its own minor risk simply because a major studio decided to dedicate $130 million towards something called “Ant-Man.”)

“All I need is possible.”

In other words, the table has been methodically set for the movie debut of Doctor Strange. The character first appeared in “Strange Tales” #110 in July 1963, and the “Sorcerer Supreme” became a linchpin of Marvel Comics’ more mystical and far-out adventures. If you exclusively follow this stuff through the MCU, then you initially heard the name “Stephen Strange” when it was conspicuously dropped during 2014’s Captain America: The Winter Soldier. You get the sense that Marvel Studios would like to make Strange (and the commander actor who plays him) a central figure of its cinematic plans going forward.

Benedict Cumberbatch stars as Strange, a superstar neurosurgeon with a spotless record. (Nevermind that Strange maintains his perfect record, in part, by avoiding “loser” cases that don’t have much chance of bringing him glory.) After a catastrophic car accident renders his hands useless, Strange spirals out of control and alienates the one person in his life who seems to care about him, ER doctor and former lover Christine Palmer (Rachel McAdams). After learning of a man whose paralysis was miraculously healed using more spiritual means, Strange travels to Nepal in a desperate bid to restore his former life

Strange arrives at Kamar-Taj — the home base and training ground for the Masters of the Mystic Arts — and encounters the Ancient One (Tilda Swinton), who reveals the existence of an astral plane and alternate dimensions to a disbelieving Strange. With some prompting from trusted Master Mordo (Chiwetel Ejiofor), the Ancient One agrees to take Strange on as a student. Despite being weighed down by his rational mind and over-inflated ego, Strange demonstrates exceptional abilities. It’s a good thing too because the world faces a major threat from Kaecilius (Mads Mikkelsen), a former Master who wants to use stolen pages from a book belonging to the Ancient One to summon a powerful being from the Dark Dimension.

“This is no time for showing off, Strange.”

While the movie inevitably echoes other MCU outings — the theft of those pages in the movie’s prologue is basically a loose remake of the opening from Captain America: The First Avenger — the best thing about Doctor Strange is that it introduces a new visual language into these movies. (Composer Michael Giacchino also chips in with a vaguely psychedelic score that stands out among a sea of heroic sameness.) Sure, the movie’s dizzying, world-bending visuals are pretty reminiscent of what Christopher Nolan brought to Inception, but it remains a welcome shot in the arm for the comic book arena. The early sequence where Strange is violently yanked from one dimension to another is exhilarating (despite the fact that the movie’s 3D conversion is pretty underwhelming). And even the film’s climax — which features the patented Marvel Swirl of Destruction in the Sky — is given an infinitely cool, time-tweaking spin.

Just as importantly, Marvel maintains a health sense of humor and self-awareness about how silly a lot of this stuff is. (After all, terms like “sling ring” and “Cloak of Levitation” figure heavily into the story, and there’s a life-or-death fight scene on the astral plane that barely makes a ripple in the real world.) Actually, there are a few instances — including a Beyonce joke and an extended sequence where Strange’s sentient cape beats the tar out of a bad guy — where I felt the movie got a little too jokey. There are, however, many minor pleasures to be found in Doctor Strange to go along with the visual spectacle. (For example, I enjoyed the fact that former Law & Order star Benjamin Bratt briefly appears in the sort of expository scene that you’d always see on L&O when the detectives would briefly drill a random New Yorker for information.)

The director here is Scott Derrickson (Sinister, The Exorcism of Emily Rose), who isn’t really known for his light touch. But the filmmaker — who is also credited with writing the script alongside Jon Spaihts and C. Robert Cargill — largely does a nice job of balancing that humor with Strange’s evolution/journey of discovery. Despite all the inter-dimensional shenanigans, plenty of emphasis is placed on the “Doctor” part of Doctor Strange as it relates to the title character’s identity. (How he has a hard time with the idea of harming people to protect many more, and how he clings to his past life.) It’s pretty interesting stuff, but it does come at the expense of a plot that feels somewhat hurried at times.

Marvel could certainly do worse than Cumberbatch as a key piece of its Cinematic Universe. The actor doesn’t have the motormouth charm that has made Robert Downey Jr. a worldwide favorite, but he’s a confident, captivating presence who deftly balances the movie’s humor with the character’s more serious arc. Cumberbatch is supported by some impressive co-stars. I was especially impressed with the warmth and emotion Ejiofor brought to what may seem like another Black Sidekick role on paper. The most controversial bit of casting, however, is easily Swinton as the Ancient One. (Doctor Strange has a bit of fun with what audiences might expect an Ancient Master living in Nepal to look like.) Swinton is no stranger to gender–bending roles, and in Doctor Strange she shaves her head to become a yellow-hooded badass. The actress easily vacillates between earnest spiritual chatter and cutting that mumbo jumbo down with a sly quip, often in the same sentence.

On the other hand, the winning McAdams is largely wasted since Christine is only here to ground Strange to his former life. And despite the best efforts of the talented Mikkelsen, Kaecilius proves to be a largely forgettable villain. (I shouldn’t have to tell you by now to stay through the end credits of a Marvel movie…but stay through the end credits to catch a glimpse of who this franchise’s real Big Bad will likely be.)

Doctor Strange looks like both another rock-solid blockbuster for Marvel Studios and a mini changing of the guard as we head toward an intergalactic Infinity War. (Be sure to take note of the super cool new Marvel Studios logo at the start of this film.) It’s not my favorite MCU outing by any stretch, but it’s a great amount of fun and it offered a few things I hadn’t seen before, which is a godsend when you’re talking about comic book movies. In fact, the trippy visuals here might have you turning to your neighbor and asking, “what’s in that tea?”

Hacksaw Ridge Tuesday Round Up: November 8, 2016