Posted in: The Reel World by Brent Lorentson on November 4th, 2016 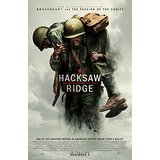 Just when you thought you’ve seen it all when it comes to films about World War II, Mel Gibson helms a film that hits you with such an emotional wallop that I’ll say it right now: just hand the man the Oscar for this film.  It’s only November; how can I be so sure of this? Well, of course there are some titles to keep an eye on as we enter award season, but I honestly can’t imagine a title coming out that can achieve what Gibson did.    I’m sure by now you’ve seen the ads for the film that draw comparisons to Saving Private Ryan.  It’s a bold statement, but I’m writing this to say that Hacksaw Ridge isn’t the best war film since Saving Private Ryan, it is a superior film to it as well.  I honestly can’t think of a war film that has ever balanced the raw violence of war while maintaining the humanity of its characters and draw out so much emotion.  It’s based on a true story, and the only injustice I see is that this film wasn’t made sooner.

Desmond Doss (Andrew Garfield) isn’t like most guys enlisting for the war; he’s not bloodthirsty and out to avenge our country after the attack at Pearl Harbor.  Desmond is a man who has been overcome with the sense of duty to honor and protect his country, only the problem is, he refuses to touch a weapon in the process.  Instead he sees that he can help by being a combat duty medic on the front lines.  It’s a notion his superiors and fellow comrades see as ludicrous.  But Desmond refuses to back down from his principles, even when his platoon has mostly turned on him and the Army is ready to court-martial him.  Why would a man go through such lengths and risk losing so much, simply because he won’t carry a weapon?  That’s where the front half of the film pays off.

For a large portion of the film, we spend it with Desmond as he is at home in his small town home, and we quickly see the day-to-day violence Desmond is faced with.  His father is an ex-soldier who is a violent drunk who takes turns beating on his boys and his wife.  Hugo Weaving (The Matrix) manages to deliver a very balanced performance that has us at times almost pitying the man for his actions.  He’s a man who clearly suffers from PTSD before it was ever a condition to be discussed, and as he sees his boys ready to suit up for war, we see how this breaks him.  And if the dynamic between Desmond and his father doesn’t tug at the heartstrings, there is the blooming romance between Desmond and Dorothy (Teresa Palmer) to help rope in the female audience.  I know I said romance, what is that doing in a war film?  This is the wholesome love affair that simply left me grinning; dare I say it’s cute to see the awkward interactions between Desmond and Dorothy as they seem to be this couple that seems so ill matched for each other that when they are together they just have a sweet chemistry.  And sweet is kind of the key word here, because that’s what Desmond is; he’s sweet.  He’s untouched by the hell of the world and sees the good in everyone; he sort of has a Forrest Gump vibe to him that makes him so likeable.  You simply can’t help but hope to see him flunk out of boot camp and stay with his wife-to-be, since in war we’re led to believe its men like Desmond who are the first to go.

Basically the front half of the film is a throwback to the films of Frank Capra in a way, but once Desmond arrives at boot camp, things take a turn.

Sgt. Howell (Vince Vaughn) comes in delivers one of his most humorous performances in years as we see him break down his soldiers. This is where we get to see Desmond struggle to maintain his beliefs about not being willing to hold a weapon.  We’ve seen The Passion of Christ; we know Gibson knows how to film a person physically and emotionally breaking on the screen.  But the performances and direction here are so well done that when it concludes, it’s the kind of rousing moment you see in the final act of a film.  But there is so much more.

By the time you get to the Battle of Okinawa, brace yourself.  It’s a shot to the gut that doesn’t ease up till the credits start to roll.  Despite how many war films have been made, Gibson manages to not just capture the kinetic chaos of war, he does so in a way that it all feels fresh and harrowing.  Blood and gore is plentiful, and when it comes to seeing Desmond in action and we see him perform the duties that in return rewarded him with the Medal of Honor, you will be emotionally exhausted and want to cheer for him.

I love this film.  I can’t even begin to describe the awe I have towards Army Medic Desmond Doss.  In a nation and a world where we’ve all become so divided, it’s refreshing to know that people as heroic as Desmond Doss exist.  Mel Gibson brought one of America’s greatest heroes onto the screen and delivered it with so much raw emotion that I can guarantee that every showing of this will have people leaving after the credits emotionally effected.  It’s a shame it took so long to bring this story to the screen; it’s a shame many will only be hearing about Desmond Doss because of this film.

Yes, Gibson has had his share of mistakes in the past.  A decade later he gives us a film that is so beautifully constructed and filled with so much heart and emotion I hope audiences and many others can look past the drama from years ago and embrace this film.  It is so near perfect, if not for one little misstep in the final act of the film I would easily give this a perfect rating.  This is already a film I see myself revisiting year after year, and hopefully there will be many others out there who will agree.

Brent Lorentson is a horror writer and film critic based out of Tampa, Florida. With a BA in Digital Film, he co-wrote and co-directed Scavenger Hunt. His short stories have appeared in various horror anthologies. In 2019 his short script Fertile Blood will be a part of the anthology horror film Slumber Party. He is currently working on his first novel A Dark and Secret Place set to be released in late 2019. Favorite Films: Taxi Driver, Fight Club, I Saw the Devil, The Wild Bunch, Dawn of the Dead, A Clockwork Orange, Pulp Fiction, Heathers, The Monster Squad, and High Fidelity.
Hell on Wheels: The Final Episodes (Blu-ray) Doctor Strange