Posted in: The Reel World by Gino Sassani on November 13th, 2016 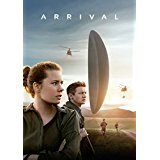 The problem is that this starts out with the kind of story we’ve seen a thousand times before. The alien invasion theme is nothing new. H.G. Wells was describing it back in the 19th Century with War Of The Worlds. Unrelated Orson Welles scared the crap out of a depression-era radio audience with the same story. Independence Day gave us a brilliantly visual story that also begins the same way: alien ships begin to take strategic positions around the world. Here we go again, right? Wrong. We should have guessed from the beginning that when director Denis Villeneuve tackles a genre, he’s going to turn it on his head. We’d seen him do it before. Last year’s Sicario gave us a “war on drugs” film that wasn’t like anything that came before it. Prisoners could have looked like a Taken sequel. I mean, how many ways can a tough guy deal with a kidnapped daughter? Of course, Villeneuve showed us there was at least one more way. He does it again with an alien first-contact film that is a blend of The Day The Earth Stood Still, 2001 A Space Odyssey, and maybe a little bit of the Twilight Zone classic To Serve Man, without the special sauce recipe. But mostly it’s a cerebral journey that mines much of the same ground that Christopher Nolan did with Interstellar. Except that Villeneuve did a better job. Oh, and he spent $120 million less to do it. You still might be scratching your head when you leave, but you will also have some wonderful themes to ponder on the drive home. Arrival might well be one of the best films I’ll see in 2016.

Gino Sassani is a member of the Southeastern Film Critic's Association (SEFCA). He is a film and television critic based in Tampa, Florida. He's also the Senior Editor here at Upcomingdiscs. Gino started reviewing films in the early 1990's as a segment of his local television show Focus. He's an award-winning recording artist for Omega Records. Gino is currently working on his 8th album Merchants & Mercenaries. Gino took over Upcomingdiscs Dec 1, 2008. He works out of a home theater he calls The Reel World. Favorite films: The Godfather, The Godfather Part II, The Body Snatcher (Val Lewton film with Karloff and Lugosi, not the pod people film), Unforgiven, Gladiator, The Lion King, Jaws, Son Of Frankenstein, The Good, The Bad And The Ugly, and Monsters, Inc.
Exclusive Interview With Sheldon Renan: Director Of The Killing Of America Billions: Season One (Blu-ray)