Posted in: Disc Reviews by Gino Sassani on November 14th, 2016 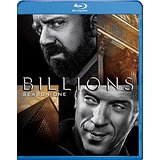 “What we do has consequences, intended and unintended. The decisions we make, the actions we bring have weight.”

When upcoming heavyweight contenders like Brian Koppelman, David Levien, and Andrew Ross Sorkin get together, you have reason to expect big things. And Billions is very much about heavyweights. The entire show is one big metaphor for a heavyweight prizefight. In one corner you have U.S Attorney Chuck “The Scholar” Rhodes, played by Paul Giamatti. He’s the reigning world champion with a record of 80+ to 0. In the other corner is Bobby “Axe” Axelrod, played by Damian Lewis; he could also be considered undefeated. He runs a sexy brokerage firm. He’s the people’s champion because he gives very freely to notable charities and particularly to first responders because his wife’s brother was a fireman killed at ground zero on 9/11. Both of these guys walk and talk like champs. There’s a lot of trash-talk between them, but both have very lurid and potentially devastating skeletons in their perspective closets. And most of the first season plays out like the traditional preliminaries of the big fight. They are headed to an ultimate collision, and it’s even-money who, if anyone, walks away with the belt.

When I say the show plays out like a prizefight’s preliminaries, I’m not even talking in an entirely symbolic way. The first season is very much a tease for what is to come, and that’s what any good first season wants to pull off. We get to know these two characters in their own worlds surrounded by their own corner people. The strength of two very strong performances immerses us in each of these worlds to a point that we discover something none of these players know, or at least would be willing to admit. They are very much the same, and the culture of their careers is more alike than not. Both are willing to bend a rule for “the common good”, and both believe themselves to be the heroes of their own stories. And that’s where the writing and acting come together for a nice perfect storm. Both characters are heroes to the people around them. They’ve developed almost cult followings. Both are admirable people. Of course, the opposite is just as true. These guys can both play the anti-hero with the best of them. There is both great good and great evil in both. If that sounds complicated here, just imagine how hard it would be to actually pull off. I rooted for both at times. Put a gun to my head and ask me who was wearing the white or black hat and I’d have to answer: “you’re going to have to shoot”.

I have to admit I had the wrong idea going into the series. I expected to see another evil rich guy puts it to the poor and gets what he has coming to him by a knight riding to the rescue of the 99%ers. The truth here is that the series doesn’t appear to pick sides, let alone assign heroes and villains. In many ways we see these characters through the eyes of their spouses. Who better to provide that inside look that includes the dirty little secrets? Axelrod’s wife Lara is played by Malin Akerman. She’s pretty much the only one here who actually came from a working class culture. She loves the billionaire lifestyle but worries that it has made her children soft and feeling entitled. She’s not blind to his flaws but is fiercely loyal. Rhodes’s wife is Wendy, played by Sons Of Anarchy veteran Maggie Siff. She’s a therapist who complicates the whole thing, because she works for Axelrod as his sales team inspirational coach and his own father confessor. She’s known Axelrod longer than her husband, and she’s being forced into the middle of this brewing confrontation. I have to say I never liked Siff in Sons Of Anarchy. I always thought she was a weak character. This time I found she provides a crucial voice here that allows the show to move so effortlessly between these two worlds. This is the kind of role I wish I had seen in Sons. There are other very good performances and stories going on here, but it’s forever impossible to avert your gaze from the heavyweights in the room. They dominate your attention and compel you to stick around for the ride. And while we are being conditioned to hate, or at least to distrust, the rich guy, which one of these guys would you rather be? I’d want to be Axelrod.

Each episode is presented in its original broadcast aspect ratio of 1.78:1. The 1080p image is arrived at with an AVC MPEG-4 codec. I like how the use of color temperature gives us a distinction between these two worlds. Chuck’s world is warm with plenty of earthy tones. Lots of wood paneling and soft lights. Axelrod lives in a world of brighter colors but also a more sterile and cold atmosphere. This high-definition image presentation does a pretty solid job of dealing with these contrasts. Of course, you’ll find a sharp image with plenty of depth and detail. Black levels are above average.

The Dolby Digital TrueHD Master Audio 5.1 pretty much there to serve the dialog. That’s where all of the action is going to be found. There are some nice dynamic musical moments that generally deal with some kind of image source music. The surrounds offer some nice fill, but very little ear candy. You won’t want to be distracted by a lot of bells and whistles here.

Street Slang: (3:02) A look at some of the jargon from these two worlds.

Location – New York: (6:57) A look at how some of the places used in the shoot add to the authenticity.

Shadow And Light: (7:51) A look at the contrast between the two main characters.

If you’re looking for some politically correct/Occupy Wall Street piece, you will be extremely disappointed. Nothing here is black and white/ right and wrong. If you love brilliant opposing character studies buoyed by powerful and nuanced performances, you’re going to find that these episodes fly by far too fast. To a connoisseur of that kind of a drama, “This is a thing of beauty.“

Gino Sassani is a member of the Southeastern Film Critic's Association (SEFCA). He is a film and television critic based in Tampa, Florida. He's also the Senior Editor here at Upcomingdiscs. Gino started reviewing films in the early 1990's as a segment of his local television show Focus. He's an award-winning recording artist for Omega Records. Gino is currently working on his 8th album Merchants & Mercenaries. Gino took over Upcomingdiscs Dec 1, 2008. He works out of a home theater he calls The Reel World. Favorite films: The Godfather, The Godfather Part II, The Body Snatcher (Val Lewton film with Karloff and Lugosi, not the pod people film), Unforgiven, Gladiator, The Lion King, Jaws, Son Of Frankenstein, The Good, The Bad And The Ugly, and Monsters, Inc.
Arrival Tuesday Round Up: November 15, 2016