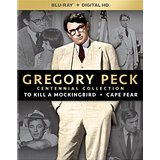 I think I see your problem. You have this list. It’s a list of people you need/want to buy a Christmas gift for. The trouble is that they’re into home theatre, and you don’t know Star Trek from Star Wars. You couldn’t tell a Wolf Man from a Wolverine. And you always thought that Paranormal Activity was something too kinky to talk about. Fortunately, Upcomingdiscs has come to the rescue every Christmas with our Gift Guide Spotlights. Keep checking back to see more recommendations for your holiday shopping. These gift guides ARE NOT paid advertisements. We take no money to publish them. We shine our first spotlight on two great gift ideas from Universal Studios.

Just in time for the holidays, Universal offers The Gregory Peck Centennial Collection on Blu-ray. It’s two of Peck’s most important films in restored high definition.  It’s all part of Universal’s celebration of 100 years since Peck’s birth. If you have a classic film fan on your shopping list, this is an easy choice indeed.

In the rural south of the 1930s, a black man is charged with the rape and beating of a white woman. Defending him is Atticus Finch (Gregory Peck), and the events surrounding the case are seen through the eyes of Finch’s two children. The film is thus just as much about children’s fears (embodied by Boo Rradley [Robert Duvall], the boogeyman next door) and perceptions of the world as it is about race and unequal justice.

In Finch, Peck incarnates what may well be the supreme portrait of absolute decency on the screen. But such is his presence, so convincingly does he radiate honor, that the portrayal is never cloying, and feels so true that even this skeptic was struck to the bone. The performances by the children are also superb. Mary Badham (who plays daughter Scout) in particular is utterly authentic.

This thriller was based on a book by John D. MacDonald and later remade in 1991 with Nick Nolte and  Robert DeNiro in the leading roles. Here Peck plays Sam Bowden, another small-town lawyer who is being stalked by a murderer, played by Robert Mitchum. It was Bowden’s testimony that sent him to jail. Now he’s out for revenge that leads him to Bowden’s family at an isolated place in Cape Fear. This one has an awesome support cast that also includes Telly Savalas, Martin Balsam, Polly Bergen, and Edward Platt, the Chief from Get Smart.

These films represent the Marx Brothers at their most anarchic and creative. Though they made other very strong films, these are the comedians at their peak.

The Cocoanuts (1929) is the most dated of the bunch. The pacing is pretty sluggish,but we are also at the dawn of sound movie here. Groucho runs a Florida hotel here, and this provides a suitable setting for varied shenanigans as well as plenty of dancing girls. The film also has a certain charming rawness to it, as when Groucho very clearly flubs a line in the early goings.

For their second film,, the target is once again the idle rich. The Brothers find their way into a society party, and art theft is the supposed storyline, but of course this is just an excuse to set up the gags.

Monkey Business (1931), unlike its predecessors, is not a stage play transferred to film. This was the first film by the Brothers that was a screen original. Here, they’re stowaways making life hilariously miserable for all around them.

Horse Feathers (1932) shifts to a local that is just as loaded with characters, and thus comic potential. Now Groucho runs Huxley College, and academia is reduced to the expected chaos. Does anything make sense? Doesn’t matter if it’s funny.

Duck Soup (1933) is the masterpiece. Here Groucho is the newly minted president of Fredonia, and war looms with neighbouring Sylvania. Chico and Harpo are spies who are supposed to be working against Groucho, but wind up doing far more damage to their employer. The plot ceases even to be a convenience by the end, disappearing in a welter of surreal gags. The big “We’re Going to War” song is one of the all-time great lampoons.

Gino Sassani is a member of the Southeastern Film Critic's Association (SEFCA). He is a film and television critic based in Tampa, Florida. He's also the Senior Editor here at Upcomingdiscs. Gino started reviewing films in the early 1990's as a segment of his local television show Focus. He's an award-winning recording artist for Omega Records. Gino is currently working on his 8th album Merchants & Mercenaries. Gino took over Upcomingdiscs Dec 1, 2008. He works out of a home theater he calls The Reel World. Favorite films: The Godfather, The Godfather Part II, The Body Snatcher (Val Lewton film with Karloff and Lugosi, not the pod people film), Unforgiven, Gladiator, The Lion King, Jaws, Son Of Frankenstein, The Good, The Bad And The Ugly, and Monsters, Inc.
Allied Bad Santa 2