Posted in: The Reel World by Gino Sassani on November 27th, 2016 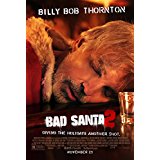 OK, maybe he’s not selling arms to the Middle East, but when Billy Bob Thornton puts on the Santa suit, there’s no telling what kind of dirty dealing might be going on. Bad Santa was a kind of surprise hit back in 2003. It made a respectable $60 million at the box office and pretty much disappeared from most people’s holiday film radar. Let’s be honest here. Bad Santa wasn’t going to make the list for traditional family gatherings in quite the same way as It’s A Wonderful Life, Miracle On 34th Street, or even among the irreverent favorites like A Christmas Story. I just can’t see the grandkids on granddad’s knee watching Santa tell some kid to go f#%@ himself. The whole Spirit of Christmas thing, and all. But it was a rather funny movie. Still, I never expected there would be a sequel. But someone’s Christmas list must have been begging for some naughty, and Billy Bob is back, older if not any wiser. If you can handle some rough language and a rather raunchy good time, Bad Santa 2 might just be on your Christmas list, too.

Just as in real life, it has been 13 years since the events of the first movie. Willie Soke (Thornton) has tried to go straight. There’s just something about his temper, or is it his alcohol abuse, that makes it hard for him to keep a steady legit job. Thurman (Kelly) has just turned 21 and is a dedicated worker at a sandwich chain. Any resemblance to Subway or a certain pedophile spokesman is strictly unintentional. Thurman might be a man now, but he still clings to Willie, who doesn’t have the heart to completely shut him down. Thurman knows he isn’t really Santa Claus, but he’s his Santa. There’s a chance he can break away from the kid and legit life when his former partner in elf-crime Marcus (Cox) shows up with a job. Of course, Willie’s going to have to get over that trying-to-kill-him thing that Marcus pulled the last time they met. But the promise of a multi-million score sends the duo to Chicago where Willie learns the job’s being run by his estranged mother, played by Kathy Bates.

The job involves a charity which is supposed to keep millions in the safe as they hold their annual Christmas concert for the kids. So Willie puts on the suit, puts up with his crazy mother, and puts the moves on some of the charity’s ladies. What ensues is the kind of raunchy comedy that you need to expect from this movie. A word of caution: Watch the first one before you do. At our screening a fellow-reviewer and I were marveling at the audience members who didn’t know anything about the first film and what it was they were in for that night. Some of the reactions were priceless. And if you have the stomach to wait until the end credits …well … all I can say is the best/worst is yet to come, depending on your perspective.

The laughs here are all about character. Billy Bob has the ability to play a completely bad guy yet somehow let just the hint of a heart show. I thought it would be awkward with the kid all grown up, and it was. And that was also quite funny. The two shared pretty remarkable chemistry that will take you back to the first film. Their roles have changed, but not really that much. Tony Cox is another actor who delivers here. I’m not sure I remember him in much of anything else the last 13 years, but he’s a welcome face here. Add Kathy Bates to the mix, and that’s all where the comedy gold comes from. Too many raunchy comedies rely on the outrageous behavior and the toilet or sex humor. This is the kind of comedy where that kind of material becomes funny because of the delivery, not the joke. It’s a lesson party movies can learn from. Like any other kind of film, it all starts with characters. And no amount of backed up toilets or puking into a bong is going to make up for good characters. Now if you stay for the credits, forget about everything I just said.

Look. Bad Santa 2 will do about the same thing the first film did. It will be a fun and funny movie that we’ll all move on from by this time next year. It’s not destined to become a classic. But some future Christmas Eve when the house is dark and quiet and while the kids are waiting for a visit from the big guy, when not a creature is stirring, not even a spouse, some of us might just pop these two films into the player, turn the sound way down low, and hope we don’t laugh so hard we end up waking up the neighborhood. Guilty pleasure my butt. “It’s okay to like what you see.”

Gino Sassani is a member of the Southeastern Film Critic's Association (SEFCA). He is a film and television critic based in Tampa, Florida. He's also the Senior Editor here at Upcomingdiscs. Gino started reviewing films in the early 1990's as a segment of his local television show Focus. He's an award-winning recording artist for Omega Records. Gino is currently working on his 8th album Merchants & Mercenaries. Gino took over Upcomingdiscs Dec 1, 2008. He works out of a home theater he calls The Reel World. Favorite films: The Godfather, The Godfather Part II, The Body Snatcher (Val Lewton film with Karloff and Lugosi, not the pod people film), Unforgiven, Gladiator, The Lion King, Jaws, Son Of Frankenstein, The Good, The Bad And The Ugly, and Monsters, Inc.
Holiday Gift Guide Spotlight: Universal Studios Return Of The Living Dead 3 (Blu-ray)