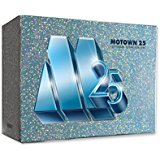 I think I see your problem. You have this list. It’s a list of people you need/want to buy a Christmas gift for. The trouble is that they’re into home theatre, and you don’t know Star Trek from Star Wars. You couldn’t tell a Wolf Man from a Wolverine. And you always thought that Paranormal Activity was something too kinky to talk about. Fortunately, Upcomingdiscs has come to the rescue every Christmas with our Gift Guide Spotlights. Keep checking back to see more recommendations for your holiday shopping. These gift guides ARE NOT paid advertisements. We take no money to publish them.

Let’s deal with that home video collector who is also into the toe-tappin’ sound of classic Motown music.

“Some of the things you’re gonna see this evening are gonna blow your mind.”

The concert originally aired as an NBC TV special on May 16, 1983. Even if a certain single-gloved superstar hadn’t (moon)walked away with the show, Motown 25: Yesterday, Today, Forever would’ve gone down as one of the most astounding collections of musical talent and star power ever to be assembled on a stage. And that’s before you even consider that Richard Pryor — probably the world’s hottest comic at the time — served as the program’s host. This three-DVD set offers an extended version of the show, an uncut rehearsal session with Marvin Gaye, and a treasure trove of featurettes and interviews.

Naturally, the main attraction here is the music, which is featured in its entirety on Disc 1. Despite opening with a Fame-ish number to “Dancing in the Street” that very much rooted the program in the early ‘80s, Motown 25 was absolutely about celebrating the singers, songwriters, and producers who helped build the record company into an indelible American institution.

The extended edition of the show clocks in at 124 minutes and incorporates more than 20 minutes of additional content. I admit I haven’t dusted off the old “Motown 25” VHS in more than a decade, so I can’t say with absolute certainty what was added. However, this extended edition had more vintage clips, pre-taped packages (including one with a team of Motown songwriters riffing on “Money (That’s What I Want)”), and between-song patter than I remember. The vintage clips are especially cool to watch when they meld into the same artist performing in 1983.

Beauty & the Beast: The Final Season Tuesday Round Up: December 6, 2016