Beauty & the Beast: The Final Season

Posted in: No Huddle by Jeremy Butler on December 6th, 2016 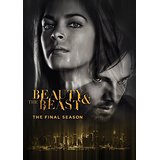 When this series initially started, I was intrigued, although it merely seemed like a filler show. However, I find that I have to eat my words, since Beauty and the Beast survived four seasons before coming to a climax with this final season. The swan song for the show had already been sung before the first episode of this season even aired, but that didn’t stop the cast or the crew from providing a suspense-filled season as well as a proper conclusion to the story.

Catherine and Vincent’s (Kristen Kruek and Jay Ryan) tale has been filled with danger and circumstances that have tried to tear them apart, usually starting the seasons apart. However, the start of the final season finds them very much together and celebrating their honeymoon. They believe the danger is behind them and Vincent’s secret is safe, courtesy of a Department of Homeland Security cover-up. Matters heat up quickly when news regarding beasts starts to hit the internet. Before long, the couple finds themselves back in the thick of things aided by their loyal friends J.T., Tess, and Catherine’s sister, Heather.

Someone is hunting beasts, and one wrong move could lead to Vincent’s exposure, leading Cat to join the Department of Homeland Security (DHS) for their resources in order to uncover the plot, discovering that someone is trying to pick up where Muirfield left off and make more beasts. Endeavoring to find those responsible will cause Cat and Vincent to find themselves on the run again from people they once counted as allies.

So with the knowledge of this being the final season of a show that I have been in and out of for years (really into the first season, loss interest midway second season, and came back during the third season), I can say that I was thoroughly satisfied with its conclusion. Admittedly, yes, it was a bit predictable, but when you think about it, for two people who faced so many obstacles, it couldn’t have ended any other way.

Character-wise it goes without saying that the cast has really come into their own, which is quite an accomplishment given that several members originated from different CW shows. Although the show is focused on Kruek and Ryan (the beauty and the beast respectively), the supporting cast has come into their own and command just as much screen time as the leads. The breakout is definitely Austin Basis, AKA  J.T., who has undergone the most character development over the length of the series, going from socially awkward genius to a hero in his own right.

That said, never underestimate the power of a love story, and the one that has unfolded over the past four years is a good one. Granted that the past life ancestor storyline was a hard pill to swallow, it’s not hard to see why the show was brought back year after year, and this season was no exception. My favorite part is the balance of the police procedural with the science fiction. This is one of the best instances that I have ever seen it done, especially in regards to the conspiracy to make more beasts following the fall of Muirfield, all the while with Cat balancing her new position at the DHS.

So the time has come to say goodbye to the series. I can confirm that the loyal followers will be pleased with how the story ended, or least I was, as it stayed true to the principles that were established since the very beginning of the show. So I encourage the fan base to join me in honoring the end of a series which has brought several hours of entertainment in my life.

Jeremy Butler is a film school graduate of the International Academy of Design and Technology. He is been writing for Upcomingdiscs since 2012; however, movies have played a big part of his life for much longer. Favorite genres include horror, science fiction/fantasy, and comedy. Favorite movies are V for Vendetta, Boondocks Saints, Kiss Kiss Bang Bang, and The Godfather.
The Hunger Games: Mockingjay Part 2 (UHD Blu-ray) (4K) Holiday Gift Guide: Star Vista