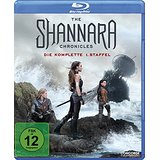 I think I see your problem. You have this list. It’s a list of people you need/want to buy a Christmas gift for. The trouble is that they’re into home theatre, and you don’t know Star Trek from Star Wars. You couldn’t tell a Wolf Man from a Wolverine. And you always thought that Paranormal Activity was something too kinky to talk about. Fortunately, Upcomingdiscs has come to the rescue every Christmas with our Gift Guide Spotlights. Keep checking back to see more recommendations for your holiday shopping. These gift guides ARE NOT paid advertisements. We take no money to publish them. Let’s take a look at what Paramount has to offer in the television on Blu-ray department.

With the success of the Teen Wolf series, it comes as no surprise that MTV would not just capitalize on creating another genre series to the channel, but also tap into the success of a young adult book series. It seems like a no-brainer. Tackling the book series of The Shannara Chronicles was a big risk for the network, with a large cast and a lot of effects, but most importantly, this may be the most dramatic shift the network has had in appealing to a demographic.  Really, let’s take a moment and realize how the network that once appealed to the audience that praised the exploits of The Jersey Shore is now attempting to appeal to a geekier and, let’s face it, a smarter audience. It’s a true sign of the times and how things have changed, and it’s a change for the better.

The Shannara Chronicles takes place on Earth, many years after the planet suffered through some cataclysmic event.  The world, or at least as far as I can tell, America, is now known as The Four Lands.  When the series opens up we are introduced to Amberle (Poppy Drayton), who is an Elf princess, but has been secretly in training for a contest that will determine an elite group called The Chosen, who are basically the protectors of her people.  As it would turn out, she does succeed, but it’s at a cost.  Her people worship a magical tree called the Elcrys that gives power and protects the people. Unfortunately the tree is dying, and Amberle may be its only hope for survival.

There is also Wil (Austin Butler), a half-man/ half-elf who has set off on a journey himself to uncover the truth behind these magical blue elf stones.  Early on in his journey he crosses paths with Eretria (Ivana Baquero), who is a Rover (a human thief) who of course has a suspicious agenda.  It takes some time, but in time Amberle, Wil, and Eretria come together on a quest to find a seed and have it replanted so that a new Elcrys can form.

“Space…the final frontier. These are the continuing voyages of the Starship Enterprise. Its five-year mission: to explore strange new worlds, to seek out new life and new civilizations, to boldly go where no man has gone before!”

Of course, we never did get five years from that original show when it ended after just three years in 1969. The new film series has tried to fix that for us. The latest film picks up the five-year mission just after three years have gone by. It’s a double homage to the original show. The number of days reflected the series start, and it picks up where they left off…kind of. But we did get a fourth and partial fifth year of the original voyages, and while it has never been considered truly canon, the original cast joined many of the original writers in 1973 to bring Star Trek back to the small screen. It was Filmation’s Star Trek: The Animated Series, and it appeared on Saturday mornings from 1973 until 1974.

The animated show might not be considered as part of the franchise continuity, but it actually had the closest ties to the original series more than anything that came after it. All of the originals returned with the exception of Walter Koenig as Chekov. He did end up writing one of the episodes. His omission wasn’t any kind of disagreement on either side or an unwillingness to participate. It all came down to budget. Instead James Doohan, Majel Barrett, and Nichelle Nichols did most of the additional voices on the episodes. Doohan in particular had been known as a voiceover guy before his turn at Scotty. He had initially auditioned several ethnic accents before Roddenberry decided to use the Scottish brogue.

After 20 years or more, they really do feel like friends. I’ve known Cartman, Stan, Kyle, and Kenny longer than most real people in my life. Only the Simpsons have been around longer these days. Over those years South Park has always been a series of stories that rarely connect with each other in any significant way. There have been multi-part episodes, and certain experiences have come back up over the years. Still, we’re talking about a universe where killing Kenny had become a running joke and happened pretty much in every episode. Those days are gone, and it’s been a while since Kenny met his demise, and now South Park has joined the ranks of the continuing story season. I do believe that’s one of the signs of the Apocalypse. I’m just sayin’.

“Change or die” is the mantra in entertainment. South Park has appeared rather immune to that kind of reality. Perhaps Trey and Matt have decided to get out in front of things just in case. I’m not sure if I like the idea of this being the complete future for the show. But let’s see where it goes. Evolution has finally caught up to the old gang. “Reality, who let him in?”

Gino Sassani is a member of the Southeastern Film Critic's Association (SEFCA). He is a film and television critic based in Tampa, Florida. He's also the Senior Editor here at Upcomingdiscs. Gino started reviewing films in the early 1990's as a segment of his local television show Focus. He's an award-winning recording artist for Omega Records. Gino is currently working on his 8th album Merchants & Mercenaries. Gino took over Upcomingdiscs Dec 1, 2008. He works out of a home theater he calls The Reel World. Favorite films: The Godfather, The Godfather Part II, The Body Snatcher (Val Lewton film with Karloff and Lugosi, not the pod people film), Unforgiven, Gladiator, The Lion King, Jaws, Son Of Frankenstein, The Good, The Bad And The Ugly, and Monsters, Inc.
Tuesday Round Up: December 13, 2016 C.H.U.D II: Bud The Chud