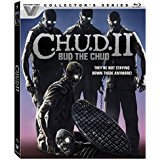 The first time I saw C.H.U.D., I was deathly afraid I was going to be watching yet another zombie movie. C.H.U.D. is an acronym for ‘Cannibalistic Humanoid Underground Dwellers,’ so with only that description, my assumption wasn’t unreasonable. For the readers who have actually seen C.H.U.D., you probably know that I was pleasantly surprised: it was actually a very fun monster movie. Yes, they were humanoid, but they were rather creepy, with bright glowing eyes and scaly skin. C.H.U.D II apparently forgot how amazing the original creatures were, because they are absent from the entire film (even though they are proudly displayed on the front cover of the Blu-ray case). Instead, we are treated to a zombie film with glam metal transition music and only the worst brand of tongue-in-cheek silliness.

The film begins within a no-name military hospital, where the ‘higher-ups’ are determining what to do with the last C.H.U.D. specimen, named Bud (Gerrit Graham). This entire meeting summarizes the absolute basic elements of the original plot line (essentially creating an information dump consisting of what the writers may have remembered from that one cool movie that they had seen a couple years ago). Now, Colonel Masters (Robert Vaughn) seeks to utilize the C.H.U.D Virus for biological warfare, but his funding is suddenly cut. He orders the body to be frozen and sent to a CDC facility in a small town. Upon arrival, the body finds its way into the hands of teenagers who need it for their school project. The fun ensues.

I am a huge fan of horror film sequels, specifically those that carried on through the 80’s and 90’s. The primary reason I enjoy these sequels so much is that they make creative expansions to the original storyline. The Halloween, Nightmare on Elm Street, and Friday the 13th (to name a few) franchises all had fascinating sequels, many of which were actually well-written stories. C.H.U.D. II on the other hand, really had no redeeming artistic merit for me, and believe me: I was looking. Instead, the writing only seemed to set up punchlines that involved Bud turning the entire town into other cannibalistic humanoids, or zombies. Except, without the “underground dwellers” portion of the acronym in place, the film took on the persona of an absurd sequel to George Romero’s Day of the Dead.

So what exactly worked in C.H.U.D. II? Casting. At least for the people I named in the synopsis. The teenage gang was very forgettable, but Gerrit Graham and Robert Vaughn are always a pleasure to see. Vaughn, in the case of this film, was doing his best to channel George C. Scott’s infamous General ‘Buck’ Tugidson (Dr. Strangelove) through the entire movie, and strangely enough, it worked. His zany, over-the-top military antics transcended the absurdity of the plot to a point where I could enjoy them. Graham, on the other hand, really hammed it up as Bud, which made the absurdity rather infectious. If you combine those two elements with a silly story about redeeming a failed science experiment at a small town high school, it could satisfy a viewer’s cinematically juvenile fancies. Basically, it is very obvious as to why this film might have a cult following, but it just didn’t have the lure to fool me personally.

Overall, the film wasn’t an intense chore to sit through, but it was a chore nonetheless. The Blu-ray transfer was surprisingly well done, which makes me wonder how they were able to have such great quality film in the first place. I mean, it’s a sequel to an already obscure horror film.  If you are a super fan of the original C.H.U.D., or just a fan of horror sequels, I wouldn’t recommend this film. Keep the C.H.U.D.s in your disc collection scaly and dwelling underground.