Posted in: No Huddle by Brent Lorentson on December 21st, 2016 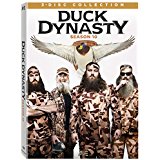 It’s hard to believe it, but Duck Dynasty has made it to ten seasons, and it seems to be still going strong.  When seeing the trailers for the first season, I found it hard to believe this was even going to be a show, much less garner the attention that it has over the years.  I’ll admit it I surprised myself by how much I actually enjoyed the show, even if it was being a bit liberal by crediting itself as reality television.  Even if most of the show seems pre-scripted,  it’s continued to be entertaining, which is rather impressive for me, considering I feel I don’t even fit the show’s demographic. For those who have been viewers from day one, you’ve gotten to watch the Robertson family not only grow older but expand as well.  Willie (the head of Duck Commander) and his wife Korie attempt to celebrate their 25th wedding anniversary, only there is a big catch that is rather amusing.  We also get to meet their new adopted son, Rowdy, as well as see their daughter, Sadie, finally graduate high school as she struggles to decide on what she’d like to do next with her life.  For the most part these are all situations that most families can relate to in one way or another, only the Robertson clan of course feels the need to ramp it up and take it over the top.

Personally my favorite character on the show is Willie’s brother Jase, and to a point he seems to have more focus put on him this season more than in seasons past.  One of the more entertaining episodes has Jase and his younger brother Jep in competition with each other over who is the rightful owner of their grandfather’s rifle.  Unless you are a stranger to the show, you know this dispute can only be settled by a competition; this time the boys go head to head in a marksmanship competition.  Also as competitions go, the Robertson boys have a competition for which of their wives makes the best cornbread, a fun reminder that you’re watching a good ol’ southern family reality show.

The show seems to be losing its flare for originality. Uncle Si having now basically become a parody of himself is one of the more blatant examples of this.  Si has gone from being one of the more entertaining characters in reality TV to now sadly being a simple punchline.  With the family being as large as it is, I don’t see the harm of using him a little less and allowing his appearances to feel less staged.  For instance, when we see Si attempting to be Jase’s lawyer over a parking infraction, it’s so over-the-top that it is impossible to take it seriously.

Season 10 comes with 14 episodes on three discs. While this is far from my favorite season, it still manages to entertain and deliver a few good laughs.  Its shows like this that I feel balance out some of the more over-the-top shows that tend to aim more for shock value.  Duck Dynasty continues to hold its head high and manages to deliver a positive message week after week, which is something I can appreciate as well as families out there looking for something everyone, young and old, can sit down together and enjoy.

Brent Lorentson is a horror writer and film critic based out of Tampa, Florida. With a BA in Digital Film, he co-wrote and co-directed Scavenger Hunt. His short stories have appeared in various horror anthologies. In 2019 his short script Fertile Blood will be a part of the anthology horror film Slumber Party. He is currently working on his first novel A Dark and Secret Place set to be released in late 2019. Favorite Films: Taxi Driver, Fight Club, I Saw the Devil, The Wild Bunch, Dawn of the Dead, A Clockwork Orange, Pulp Fiction, Heathers, The Monster Squad, and High Fidelity.
Tuesday Round Up: December 20, 2016 Holiday Gift Guide Spotlight: Cohen Media Group