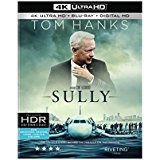 We are less than a week away from Santa making his annual jaunt around the globe. But as we inch closer to the magic of Christmas Eve, I want to talk about a different gray-haired pilot at the center of a wintry miracle. Thanks to Warner Bros., we’ll have a review of Sully in 4K, which examines the real-life “Miracle on the Hudson.” Speaking of taking flight, Warner was also kind enough to deliver Storks in 4K and 3D under our tree. Meanwhile, Lionsgate counts to 31, and Candy Factory hikes with the Children of the Mountain.

One last reminder before signing off for the week: if you’re shopping for anything on Amazon (time’s running out to get those Christmas presents delivered on time!) and you do it through one of our links, it’ll help keep the lights on here at UpcomingDiscs. See ya next week!