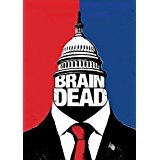 I think I see your problem. You have this list. It’s a list of people you need/want to buy a Christmas gift for. The trouble is that they’re into home theatre, and you don’t know Star Trek from Star Wars. You couldn’t tell a Wolf Man from a Wolverine. And you always thought that Paranormal Activity was something too kinky to talk about. Fortunately, Upcomingdiscs has come to the rescue every Christmas with our Gift Guide Spotlights. Keep checking back to see more recommendations for your holiday shopping. These gift guides ARE NOT paid advertisements. We take no money to publish them. This time we look at some season sets available for Christmas this year from Paramount Television and Showtime.

Ray Donovan (Schreiber) is a Boston native who moved his entire family including his two brothers out to L.A.. There he built an empire by being very good at what he does. What he does is fix problems, particularly for big-name celebrities and the lawyers who coddle represent them. His father has spent 20 years in jail for a crime he might not have actually committed. But Ray hates his father enough to have set him up and sent to jail. Ray has a wife, Abby (Malcomson) whom he keeps at an arm’s length of his dubious business dealings. He also has a son and daughter who are somewhat conflicted in their feelings for their father.

Ray has two brothers. They run a boxing gym called Fite Club. Terry (Marsan) is pretty much a burned-out boxer himself. He works training other fighters. Bunchy (Mihok) has more serious issues. He has the mental capacity of a 12-year-old and can’t really take care of himself. He’s as challenged emotionally as he is mentally. Much of this is the result of his abuse at the hands of a parish priest when he was young. Ray tries to look after him, but Bunchy wants to be able to take care of himself, even when he can’t. It doesn’t help that he has a pretty bad drinking problem.

“My name is Walter O’Brien. I have the fourth highest IQ ever recorded: 197. Einstein’s was 160. When I was 11 the FBI arrested me for hacking into NASA to get their blueprints for my bedroom wall. Now I run a team of geniuses, tackling worldwide threats only we can solve…”

By now you are used to the geeky technical expert that is a requisite part of many television crime-solving teams. It’s become such a stereotype that it’s more formula than character by this point. So what if you had an entire team of these super-intellects, and there was only one normal person in the lineup? What would that look like? You don’t have to ask yourself that question any more. If you’re curious about the outcome, you might find this new procedural drama from CBS of interest.

NCIS continues to be one of the top dramas on television. After 13 years, that’s a hard trick to pull off. With two spinoffs enjoying a pretty nice run, there are nearly 500 episodes of the franchise. The show just received a rare two-year extension and doesn’t appear to be slowing down. The show has seen a lot of changes over the years. Cast members have come and gone, but a strong core has remained for the long haul. More changes are on the horizon. Michael Weatherly leaves after this season. He’s certainly been one of the more beloved members of the original cast. It will be a tough road, but something tells me the show is going to be just fine. If Season 13 is any indication, NCIS is a long way from slowing down.

Season 12 ended with a shot Gibbs (Harmon) fighting for his life. Of course he survives, but not without a few changes. For at least the early part of the season, Gibbs becomes a bit more reflective. He also appears to have a better appreciation for the team. Jon Cryer joins the cast as Dr. Cyril Taft, who saves Gibbs’s life. He ends up joining the team as the new guy.

One of the reasons for this is the writing and the cast. There appears to be a symbiotic relationship here that is unlike anything else you’re likely to encounter on television. Everyone here appears to genuinely like everyone else. I’m not talking about the love-fest stuff you always get in interviews or release bonus features. There’s a bounciness that pervades the show both on and off the screen. The writers appear to flourish with that kind of energy and find ways to reveal character elements that are new each season. Over 13 years, that can’t be easy. The truth is, however, that these guys make it look deceptively easy. Each character gets their time to shine, and this season has given us numerous highlights for each, allowing us to see something in them that we haven’t seen before.

“It is with profound praise and gratitude that I welcome you new police officers, proud that you have answered the call to service and today join the ranks of New York’s finest.”

Guess who else answered the call? Tom Selleck has traded in his bright fire-engine-red Ferrari and Hawaiian sun and surf for a desk job at the New York Police Department. And oh, what a desk job it is. CBS has scored a homerun with its freshmen drama series Blue Bloods. It might just have been the best new show of the 2010-2011 season.

“You have earned the distinction of being the best -rained, best-prepared police officers in the world. Ready to serve and protect the most vibrant city in the world, where everyday brings a responsibility to keep all New Yorkers safe. Safe from crime and safe from terrorism.”

Blue Bloods is the first television drama to capture the best of the police procedural and also the warmth and charm of the family drama. It’s like NYPD Blue invaded the set of Brothers & Sisters. The show brings incredibly good writing and production values that do look and feel like a film every week. You hear that a lot from series show runners, but this is one of those rare cases where it is true. It doesn’t hurt that the show has a strong cast that includes the like of Selleck and Donnie Wahlberg. It doesn’t work unless everyone connected with a show buys into a common goal. That’s exactly what you get here, and it shows on the screen.

OK… there’s not going to be a Season 2. This was a risky show to begin with. You’ve got alien bugs invading the brains of Senate members, and they start to go to their own radical left or right agendas. Mary Elizabeth Winstead plays Laurel. She’s the sister of Democratic Senator Luke Healy, played by Danny Pino. Laurel discovers an epidemic of exploding heads, which is what happens if a host fights the invasion in their brain. The investigation leads to the infected members of Congress. The leader of the infected is Republican Senator Red Wheatus, who is played by an actor who is no stranger to odd behavior on television. It’s Adrian Monk himself, Tony Shalhoub. But this show is no Monk.

The series tries to take advantage of the odd election we just experienced (and are still kind of experiencing), and you see images of Trump and Hillary on screens throughout the run. The best part of the show has to be the clever episode recaps. Now, I always skip right past these annoying suckers. I mean, I have all the episodes right here. Why do I need a recap? I actually watched all of these, because they’re done as clever little folk songs. It’s a perfect gift for the Monk fan on your list who has run out of episodes on DVD.

Gino Sassani is a member of the Southeastern Film Critic's Association (SEFCA). He is a film and television critic based in Tampa, Florida. He's also the Senior Editor here at Upcomingdiscs. Gino started reviewing films in the early 1990's as a segment of his local television show Focus. He's an award-winning recording artist for Omega Records. Gino is currently working on his 8th album Merchants & Mercenaries. Gino took over Upcomingdiscs Dec 1, 2008. He works out of a home theater he calls The Reel World. Favorite films: The Godfather, The Godfather Part II, The Body Snatcher (Val Lewton film with Karloff and Lugosi, not the pod people film), Unforgiven, Gladiator, The Lion King, Jaws, Son Of Frankenstein, The Good, The Bad And The Ugly, and Monsters, Inc.
In Order of Disappearance (Blu-ray) Sully (UHD Blu-ray) (4K)