In Order of Disappearance (Blu-ray)

Posted in: Disc Reviews by Brent Lorentson on December 21st, 2016 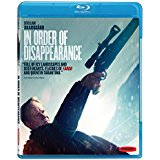 Coming out of Norway we have In Order of Disappearance, a film I knew nothing about aside from the cover art. To be , it pretty much reminded me of any of the numerous revenge films we’ve seen Liam Neeson in.  Stellan Skarsgard instead stars in this revenge romp that I feel got lost in translation with me.  It’s not that I couldn’t understand the base of the film being a revenge tale; this is very much clear as day, but it is the film’s sense of humor that borders on being dry and black, to other points I feel it’s just a Norwegian thing.  Usually one of the first things I do with a foreign film is I make sure everything is set to the original language track and use the subtitles to follow along (never been a fan of dubbing).  As it would turn out, whoever decided to subtitle this film decided to use white lettering. Normally that wouldn’t be a problem, only for this film most of the backgrounds are filled with snow, so the white on white forced me to listen to the dubbed track, and the actors doing the dubbing are really bad at times and ruin the experience.

Nils (Skarsgard) is just your average guy who has been awarded an honorary citizen of the year award; he’s humbled by this but continues on with his day-to-day life as a snow blower. His life gets thrown into chaos when he discovers his son has been murdered, and over drugs.  It’s the kind of news no parent wants to hear, and just when Nils is ready to take his own life, he comes across a drug addict who knew his son and has the answers to what “really” happened to him.  Not to throw you any curve balls, but Nils decides he wants blood and is going to go after anyone and everyone who was involved with his son dying.  As you can imagine, there is a lot of bloodshed to follow.

Ole (Pal Sverre Hagen) is the crime boss of the area. It’s his people who are responsible for the death of Nils’s son, and the problem is he is one of the most unintimidating crime bosses I’ve ever seen.  His ex-wife seems to be more intimidating and more intelligent than her vegan husband who has a ridiculous man-bun.  I’m all for a quirky villain, but it feels like Nils and Ole are part of two separate films that are going on at one time.  As things grow more serious in the story, seeing Ole’s odd behavior just seems more out of place.

There is a definite Coen Brothers vibe I get from this film, not just Fargo because of its setting, but the dark humor that seems to rise along with the quirky assortment of characters.  Whether it’s the odd gay relationship between two of Ole’s men or the odd assortment of men in a rival gang, it’s hard to not feel the hallmarks of the Coen brothers, and it’s not a bad thing.  My complaint is, if you’re going to have this odd mix, attempt to carry it out through the entire film, because as I mentioned before Nils seems to be the only one taking things seriously, and he’s out for blood while Ole kills people for laughs in some scenes.

What works best in the film is the beautiful cinematography. It’s one of those unique films that seems to capture the cold that the actors are enduring and translate it to the audience.  The snow seems to stretch on for miles in some cases, and it just looks beautiful.  Is it enough to recommend someone to check out the film?  Well, that all depends on how big a fan someone is of foreign films.  Despite my trouble reading the subtitles at times, it is better than listening to the dubbed track that is cartoonish at best and really does hurt the film at times.

At the film’s heart, it is about several different fathers who are confronted with tragedy and how they all react to it. While I wish the film took itself a little more seriously, it still manages to be entertaining, though it misses the mark at being something more.  Skarsgard does his best to carry this film and make it more than your standard revenge film, but unfortunately it just wasn’t enough.

In Order of Disappearance is presented in the aspect ratio 2.35:1.  The 1080p image is arrived at with an AVC MPEG-4 codec at an average of 25 mbps.  With so many scenes in the snow and during the day, it’s kind of amazing how much detail we get without the image being blown out.  For the few times the film moves inside, the detail and separation are there. The blacks do seem to be a tad crushed at times, but nothing that is glaring.  The skin tones seem to be right, perhaps a little on the pale side, but I think it’s safe to say this is due to location more than tone adjustments.

The DTS-HD Master Audio 5.1 default track is the Norwegian/Swedish track with the option of the white subtitles.  I mentioned my issues with this track before also with the English dubbed track.  With those points out of the way, the score comes through nicely, as do the scenes with gunfights and physical action.  The blows come through clear while at times utilizing the base.

Interview with Stellan Skarsgard: (6:01)  A brief interview about working with the director in the past and what drew him to the project.

Interview with Director Hans Petter Moland: (13:57)  Here we get a little insight into what inspired the film and the film influences he had on the film.

Brent Lorentson is a horror writer and film critic based out of Tampa, Florida. With a BA in Digital Film, he co-wrote and co-directed Scavenger Hunt. His short stories have appeared in various horror anthologies. In 2019 his short script Fertile Blood will be a part of the anthology horror film Slumber Party. He is currently working on his first novel A Dark and Secret Place set to be released in late 2019. Favorite Films: Taxi Driver, Fight Club, I Saw the Devil, The Wild Bunch, Dawn of the Dead, A Clockwork Orange, Pulp Fiction, Heathers, The Monster Squad, and High Fidelity.
Holiday Gift Guide Spotlight: Cohen Media Group Holiday Gift Guide Spotlight: Paramount TV On DVD