Posted in: The Reel World by Brent Lorentson on December 23rd, 2016 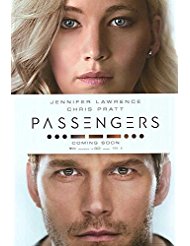 With talks going on about setting up colonies on Mars, long distance space travel is quickly moving away from the pages of science fiction to the next step in space exploration. Passengers is a film that taps into the possibilities of what this could mean for us as a species but also takes a look at the great risk that we would be facing. At a glance it would seem like a surefire Hollywood blockbuster to end the year, but I wouldn’t go so far as to say that is a sure thing.  Despite the great effects and set designs, two bankable stars, and a more than capable director, Morten Tyldum (The Imitation Game and Headhunters), what you still need is a story that will not only fill those seats but keep people wanting to come back for more.  Sadly, what we have here is so much potential that caves into telling a safe and unfortunately predictable story that we have seen time and time again.  Strap in, folks, you’re in for a bit of a bumpy ride.

Welcome aboard starship Avalon, a ship filled with 5000 passengers and a crew of 258.  The ship is on its way to Homestead 2, a planet that the people of Earth are planning to colonize.  The trouble is, to get to Homestead 2 it’s going to take 120 years, so the passengers and crew need to use sleep chambers to keep them in a cryogenic state until they arrive.  Unfortunately for Jim Preston (Pratt), his chamber malfunctions and he wakes up 90 years too soon without any way to fix his chamber and get back to sleep.

While we follow Jim around as he discovers he is the only man on the ship, it very much so has a “Robinson Crusoe in Space” vibe to it.  While Jim does what he can to not give up and search for methods to save himself from dying alone in space, the futility of his cause quickly becomes apparent.  His only “human” interactions are with an android, Arthur (Michael Sheen), and it’s these interactions that one can easily draw the comparisons to Jack Torrance and his time at The Overlook Hotel in The Shining.  Honestly if the movie remained centered on Jim I would have been happy, but it’s the character’s happiness, and more seriously, his loneliness, that leads to how Aurora (Lawrence) factors into the film.

There is a moral weight to the front half of this film that you can easily see both sides to Jims decision to bring Aurora into his life, and if the film kept the focus on this, I really feel this could have been something more than just your regular popcorn flick.  If it seems like I’m being coy about this topic, well, I’m doing my best to not reveal the film’s best story points, which are largely in the first 45 minutes of the film.

Personally my favorite bits in the film involve the interactions the characters have with their favorite android bartender.  Sheen brings life to his lifeless character, and bravo as he manages to inject so much into this deadpan character.

For those who have seen the trailers, yes, seeing this love story unfold in space is what most people are coming for.  The chemistry between Pratt and Lawrence is really a blast to watch, but when it comes to the big dramatic moments, Lawrence is simply on a level that very few her age have been able to accomplish.  But it’s when something else goes wrong on the ship that things just fall into such a predictable territory that I couldn’t help but roll my eyes and groan.  Seriously, there is a moment later in the film that is a spot-on recreation from a scene in another Chris Pratt film. Really, no one thought to perhaps rewrite this or cut this scene out?

What shouldn’t be overlooked are the beautiful sets and CGI effects throughout the film.  This is pretty much the perfect hybrid of many sci-fi films and their classic designs, from 2001: A Space Odyssey to Alien.  The interactions the characters have while dealing with gravity to simply the designs of the ship are stunning to say the least and make the theater-going experience worth it.  Still, what stands out for me over all this is the score by Thomas Newman.  Whether it is the action pieces or the more intimate pieces of music, this is one of my favorite scores of the year.

Overall there is a lot here for audiences to enjoy, that is if they are looking for fun popcorn entertainment while escaping from the family for the holidays.  Unfortunately this could have been a film with so much more to offer but instead took the easy way out.  There’s nothing wrong with popcorn fun in space, but if your goal is to try to be Titanic in space, you should reach a little higher; after all, in space, the sky is limitless.

Brent Lorentson is a horror writer and film critic based out of Tampa, Florida. With a BA in Digital Film, he co-wrote and co-directed Scavenger Hunt. His short stories have appeared in various horror anthologies. In 2019 his short script Fertile Blood will be a part of the anthology horror film Slumber Party. He is currently working on his first novel A Dark and Secret Place set to be released in late 2019. Favorite Films: Taxi Driver, Fight Club, I Saw the Devil, The Wild Bunch, Dawn of the Dead, A Clockwork Orange, Pulp Fiction, Heathers, The Monster Squad, and High Fidelity.
Holiday Gift Guide Spotlight: 2016’s Best Holiday Gift: The Oppo UDP-203 Congratulations To Jeremy Butler And His New Family