Congratulations To Jeremy Butler And His New Family

You haven’t heard much from Jeremy Butler for a while. That’s because he spent a few weeks in Japan and didn’t even bring me a pet Godzilla when he returned. What  did he do upon his return? He got married… to two women. Actually he married Jessica, who has a young daughter Nalyce, and the three of them made it official today. I have it on good authority that Jessica has excellent taste in music as well as men. Please join me in welcoming Jessica and Nalyce to the Upcomingdiscs family. We wish them many years of memories and movies together. Congrats guys! 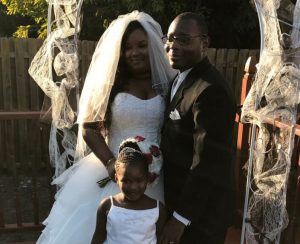 Gino Sassani is a member of the Southeastern Film Critic's Association (SEFCA). He is a film and television critic based in Tampa, Florida. He's also the Senior Editor here at Upcomingdiscs. Gino started reviewing films in the early 1990's as a segment of his local television show Focus. He's an award-winning recording artist for Omega Records. Gino is currently working on his 8th album Merchants & Mercenaries. Gino took over Upcomingdiscs Dec 1, 2008. He works out of a home theater he calls The Reel World. Favorite films: The Godfather, The Godfather Part II, The Body Snatcher (Val Lewton film with Karloff and Lugosi, not the pod people film), Unforgiven, Gladiator, The Lion King, Jaws, Son Of Frankenstein, The Good, The Bad And The Ugly, and Monsters, Inc.
Passengers 12 Days Of Christmas Giveaways – Day 1: Sully On Blu-ray From Warner Brothers