Posted in: Contests by Gino Sassani on December 26th, 2016 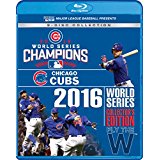 On The Second Day Of Christmas Shout Factory Gives To You:

2016 World Series Champions: The Chicago Cubs on Blu-ray. Cubs fans have been waiting 100 years for a World Series championship. Now the fans won’t have to wait near that long to have the entire series on Blu-ray. This collection includes all 7 games plus plenty of bonus material. The Cubs overcame being down 3 games to 1 and gave baseball it’s most exciting finish in decades. You also get game 6 of the NLCS. All games are complete. You won’t miss a single pitch. You don’t have to be from Chicago to win this wonderful prize.

Contest is now closed Winners are Bob Trimple and Leslie Crosbie guessed my team as the Vikings and gets the single disc version.

You could have found that info in several reviews. Way to go Leslie!

Gino Sassani is a member of the Southeastern Film Critic's Association (SEFCA). He is a film and television critic based in Tampa, Florida. He's also the Senior Editor here at Upcomingdiscs. Gino started reviewing films in the early 1990's as a segment of his local television show Focus. He's an award-winning recording artist for Omega Records. Gino is currently working on his 8th album Merchants & Mercenaries. Gino took over Upcomingdiscs Dec 1, 2008. He works out of a home theater he calls The Reel World. Favorite films: The Godfather, The Godfather Part II, The Body Snatcher (Val Lewton film with Karloff and Lugosi, not the pod people film), Unforgiven, Gladiator, The Lion King, Jaws, Son Of Frankenstein, The Good, The Bad And The Ugly, and Monsters, Inc.
12 Days Of Christmas Giveaways – Day 1: Sully On Blu-ray From Warner Brothers 12 Days Of Christmas Giveaways – Day 4: Storks In 3D From Warner Brothers