Posted in: Contests by Gino Sassani on January 1st, 2017 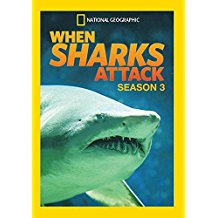 On The Eighth Day Of Christmas Fox Home Entertainment Gives To You:

A huge collection of National Geographic television DVD sets. You get Mygrations Season 1, which follows a group of humans migrating across the Serengeti. In Return From The Dead Dr. Steven Laureys investigates death and the human brain. When Sharks Attack Season 3 continues to look into shark attacks across the world. Animals Gone Wild Season 3 takes us from jungles to the depths of the ocean where animals reveal fierce natures. Finally there’s Missing Dial which looks into the case of Cody Roman Dial, who vanished in 2014. It’s all going to one lucky winner thanks to Upcomingdiscs and Fox Home Entertainment.

Gino Sassani is a member of the Southeastern Film Critic's Association (SEFCA). He is a film and television critic based in Tampa, Florida. He's also the Senior Editor here at Upcomingdiscs. Gino started reviewing films in the early 1990's as a segment of his local television show Focus. He's an award-winning recording artist for Omega Records. Gino is currently working on his 8th album Merchants & Mercenaries. Gino took over Upcomingdiscs Dec 1, 2008. He works out of a home theater he calls The Reel World. Favorite films: The Godfather, The Godfather Part II, The Body Snatcher (Val Lewton film with Karloff and Lugosi, not the pod people film), Unforgiven, Gladiator, The Lion King, Jaws, Son Of Frankenstein, The Good, The Bad And The Ugly, and Monsters, Inc.
12 Days Of Christmas Giveaways – Day 7: Time Life Bag Of Goodies 12 Days Of Christmas Giveaways – Day 9: Blu-rays & DVD’s From Magnolia