Road To The Well 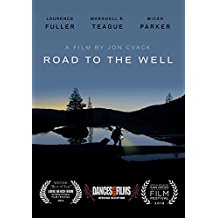 Road to the Well is about what you would expect from an independent thriller: atmospheric and character-driven, sporting a slow pace. While the pacing was indeed slow, it was most certainly deliberate and aided in the storytelling. I can’t necessarily say that I would watch the film again, but I can say I understand why it has won awards while on the festival circuit, especially given the fact that it is writer/director Jon Cvack’s first feature length film. It is a good movie. It satisfies. And even though good movies have their faults, Road to the Well succeeds in balancing its failures with tremendous amounts of successful feats.

Jack (Micah Parker), is a drifter who wanders into the town of his youth and starts to look up old friends. He convinces Frank (Laurence Fuller) to spend a night out with him, which ends in the murder of a prostitute. Together, the two strengthen their bond through the initial trauma and must make a series of difficult choices together in order to relieve themselves of the dead body. Along the way they encounter characters who add a unique flare to the story, including an intimidating seasoned military chaplain, played by Marshall R. Teague. With each new character comes a new set of choices, a subtle theme that is rather important to the development of each character.

The very first clue you get that the movie is going to be enjoyable is the score. Conor Jones has seen a little work scoring short films and his first feature length film last year, but after hearing the score to Road to the Well, I really want to hear more of his work. At times the score felt a little too grandiose for an indie feature, but as it plays on through each scene, it just begins to fit so well. It was completely unexpected, but also complementary. With that said, all of the sensory elements of the film, both sight and sound, are largely the most captivating part of the film. It looks and sounds nice, from editing to cinematography to film score and sound design. From my experience, this is abnormal for feature-length indie films. A lot of the time I silently judge the editors or sound mixers, assuring myself that I could do a better job. During my screening of Road to the Well, I did not have one moment of condescending judgment, which impressed me.

Where the film began to lack was not in the pacing, but in the tenacity of the scenes and overall predictability of the story. A lot of scenes felt very unnecessary to the entirety of the plot, primarily those consisting of a third “friend” that is added to the story.  While this third party’s story is necessary to introduce the best part of the film (Teague’s intimidating veteran), it most scenes involving him either drag or can be omitted entirely. Also, if you watch a lot of films like I do, you might try to figure out the plot twist early on. Road to the Well’s climax and resolution are very easy to spot early on in the film if you are thinking about it enough.

Overall, the ride to get to the end may be about 10 minutes longer than it should be, but it is worth a watch. Definitely one of the better independent features that has seen its way through the Upcomingdiscs hub.