Posted in: No Huddle by Brent Lorentson on January 2nd, 2017 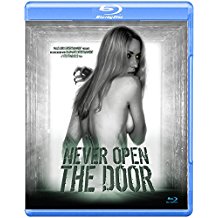 Since we are knee-deep into the holidays, it would only be fitting to discuss the independent horror film Never Open the Door; after all it takes place on Thanksgiving Day. It’s a shame we don’t have more horror films to watch during turkey day, but for some this new title may be a nice fit to change all that.  When I picked up the title I hadn’t heard a peep about it, but I’m a sucker for horror, and seeing that it was shot in B&W just made it all the more enticing.  Now, when I watch a title like this, one thing has to work. It has to have a story that engages me; story is what matters with these smaller films, because the budgets tend to not have room for big makeup FX or big-name actors.  The limitations placed upon the filmmakers seem to force their hand and have them get more creative with the execution of scenes, whether this means creative camera work or unique storytelling.  Many of my favorite directors came from shoestring budget beginnings: Peter Jackson, Sam Raimi, and Kevin Smith, to name a few.  So is the next up-and-coming directing star putting his goods on display here?

It’s Thanksgiving, and a group of friends have gotten together to celebrate by making a trip to a secluded cabin in the woods.  While the dinner is going on, we get a perspective from outside of a man running through the woods.  Most of this is through his POV, so there is plenty of shaky camera footage here; thankfully it’s not too bad.  The dinner is interrupted by a knock on the door, Tess (Jessica Sonneborn) gets up to answer it and as a result has blood spat upon her from a stranger that falls to the ground giving an ominous warning about answering the door.  There’s nothing new here, and we can pretty much telegraph what happens next; the problem is most viewers are not going to care.

As the evil seems to take control of the friends one by one while a group of odd figures stand around the house, things get stranger, but not better.  As things get stranger and the characters seem to change as though possessed or some other ominous explanation, the film just continues to grow more erratic, as though there was some indecision on where to take the story. Mind you, this is just over an hour in length, and it’s hard to imagine it would be so difficult to come up with a tighter and more engaging narrative.

It seems as though director Vito Trabucco was attempting to go a more natural approach with the performances as we see the actors talking over each other.  The focus seems to be more on the characters rather than on building suspense, not something I’d suggest when attempting to do horror, but I can appreciate seeing a different approach being taken here.

By the time the film concludes, I kind of just felt cheated. In the end I feel like this could be played off as some lost Outer Limits or Twilight Zone episode that just never aired.  If this was done as a piece of fan fiction to throw up on YouTube or Vimeo, perhaps I could look a little more kindly at it; really this just left me shaking my head, just puzzled by what they were trying to accomplish here.

Never Open the Door is presented in the aspect ratio 1.78:1.  The 1080p image is arrived at with an AVC MPEG-2 codec at an average of 14 mbps.  The film is shot and color graded to be in B&W.  It’s a style choice to appeal to the Twilight Zone tone that is being set up, and in the second half of the film this works out more.  There is a bit too much of the handheld shots that seem a bit jerky; the blacks seem a bit harsh. We don’t get to see much of a palette spread, and some detail is lost.  While it’s not terrible, it does feel low-budget, which could turn off some viewers.

The Dolby Digital 2.0 track is a bit lackluster.  Horror and suspense films can be make-or-break depending on a proper sound mix, and this one falls a bit flat.  The shouting and screaming comes off a bit too loud, and the sound FX and music just doesn’t seem evenly mixed.

An Interview with Director Vitto Trabucco: (11:41) Here the director discusses the film and about the making of the film.

An Interview with Producer Christopher Maltauro: (11:45) Though there seems to be more information in this interview it seems to have been cut short, but it’s definitely the better of the interviews.

For Maggie: (6:16) A nice little dedication to the special FX makeup artist who passed after the making of the film.

As an ultra-low-budget production that seems to have its heart in the right place while attempting to pay homage to the old Hitchcock films and Outer Limits, it’s hard for me to not appreciate the effort.  Trouble is, most hardcore fans may not be as forgiving.  If you can come across this on Netflix or Hulu and you’re a fan of the old B&W campy tales of suspense, you may get a kick out of this, but if you’re looking for something more, you’d best just let this one keep on knocking at the door till it gives up and moves on to the next.

Brent Lorentson is a horror writer and film critic based out of Tampa, Florida. With a BA in Digital Film, he co-wrote and co-directed Scavenger Hunt. His short stories have appeared in various horror anthologies. In 2019 his short script Fertile Blood will be a part of the anthology horror film Slumber Party. He is currently working on his first novel A Dark and Secret Place set to be released in late 2019. Favorite Films: Taxi Driver, Fight Club, I Saw the Devil, The Wild Bunch, Dawn of the Dead, A Clockwork Orange, Pulp Fiction, Heathers, The Monster Squad, and High Fidelity.
Road To The Well 12 Days Of Christmas Giveaways – Day 10: Noma & Entertainment On Blu-ray From Magnolia