12 Days Of Christmas Giveaways – Day 11: The Odd Couple: Season 1 On DVD From CBS

Posted in: Contests by Gino Sassani on January 4th, 2017 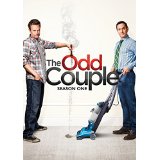 On The Eleventh Day Of Christmas CBS Gives To You:

The Odd Couple: Season 1 on DVD. First it was Jack Lemmon and Walter Mathau. Later it would be Tony Randall and Jack Klugman. An early 1980’s black version featured Ron Glass and Demond Wilson. In 1998 the original pairing of Lemmon and Mathau reprised the roles. Now it’s Thomas Lennon and Matthew Perry. Of course, I’m talking about Felix Unger and Oscar Madison from Neil Simon’s brilliant The Odd Couple. CBS has brought back the popular concept now heading into second season. They’ve given us 2 copies of the complete first season to give away to a couple of Upcomingdiscs readers.

Gino Sassani is a member of the Southeastern Film Critic's Association (SEFCA). He is a film and television critic based in Tampa, Florida. He's also the Senior Editor here at Upcomingdiscs. Gino started reviewing films in the early 1990's as a segment of his local television show Focus. He's an award-winning recording artist for Omega Records. Gino is currently working on his 8th album Merchants & Mercenaries. Gino took over Upcomingdiscs Dec 1, 2008. He works out of a home theater he calls The Reel World. Favorite films: The Godfather, The Godfather Part II, The Body Snatcher (Val Lewton film with Karloff and Lugosi, not the pod people film), Unforgiven, Gladiator, The Lion King, Jaws, Son Of Frankenstein, The Good, The Bad And The Ugly, and Monsters, Inc.
Tuesday Round Up: January 3, 2017 The Killing of America (Blu-ray)