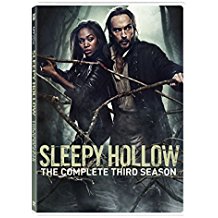 “Evil has returned to Sleepy Hollow.”

With the big bad finally destroyed and an apocalypse averted, the dynamic duo of Sleepy Hollow have gone their separate ways. Abby is now with the FBI, while Crane has gone into seclusion and ends up in jail for trying to sneak an artifact into the country from his homeland of Scotland. Abby gets him out of trouble only to discover that the tablet Crane found in his family crypt back in Europe holds more prophesy for the pair of witnesses. The two have to come back together to save the world from yet another end of times.

“There’s a new player in town.”

There is indeed a new villain in town, and it’s the legendary Pandora (Sossamon) complete with that infamous box. She’s attempting to revive her husband, known as The Hidden (Mensah). She uses the box to unleash all manner of demons and curses to throw against our heroes. The hero pool has grown to meet the new threats. We now have a complete Scooby Gang that includes Abby’s sister Jenny (Greenwood), Chief Corbin’s son Joe (Appelman), new FBI Agent Sophie Foster (Camacho), and even her long-lost father Ezra Mills, played by NYPD Blue’s favorite boss James McDaniel. Needless to say things are getting bigger and badder.

Some of the creatures the team faces this year include a gargoyle come to life, the Tooth Fairy (now we know why we get silver coins for those teeth), and Jack the Ripper, who has shown up in these supernatural shows from Kolchak: The Night Stalker to…well… Supernatural. Abby also finds herself lost in a place called The Catacombs. It’s a Purgatory place where time is one endless day, and she spends 10 months trapped. This is another element that has found a lot of use lately from, again, Supernatural to The Vampire Diaries to the legendary Phantom Zone of Superman’s universe. The place serves as a crucial point of the story and allows Crane’s past world to actually catch up with his present life.

The show has a nice distinctive style and atmosphere. The original story places Sleepy Hollow in New England, but here we’re somewhere in rural New York. The style looks a lot like that of the Underworld films, and that isn’t at all surprising. One of the show’s executive producers and director of the pilot episode is Len Wiseman, who also created the Underworld universe. There’s a lot of that cold light and blue tint to the film. There’s a bit of diverse talent in the production team. It includes Ken Olin, who is more known for family-style dramas and playing smart-mouthed Garibaldi on Hill Street Blues. He also directs four episodes, but it’s certainly Wiseman who sets the show’s tone in the pilot who dominates here. The show was also co-created and run by writers Alex Kurtzman and Roberto Orci, both of whom have worked with J.J. Abrams on shows like Alias and Fringe. So it should come as no surprise that the show contains much of that drawn-out mythology that has become a genre all its own these days. It’s all filmed in and around the Wilmington, North Carolina area.

The episodes also feature the trendy dual-story vehicle. We get treated to many flashbacks to pertinent events back in the 18th century where Ichabod had his original encounters. These moments focus on Betsy Ross a lot this season. She’s played wonderfully by Nikki Reed. Who would have thought that the seamstress stuff was really just a cover for her spy activities? She was partnered with Crane for a while and is cause for another romantic flirtation.

Fans of the National Treasure films will also find a familiar formula here as the characters explore hidden historical places for obscure artifacts. There are certainly enough conspiracies from our founding fathers to placate Dan Brown and Brad Meltzer. Turns out that even that original flag made by Betsy Ross was made with certain supernatural components.

The season ends with the long-announced retool of the show. Nicole Beharie is leaving the series, and Crane will now have a government sanction. The season also includes a crossover with Bones. I have to jump on Fox a little for how they’ve handled this. Fox can learn something from their rivals over at CBS who do a lot of the crossover thing. They always include the episodes from both shows in each series’ season set. Warner also started doing the same last year. Sadly, the Bones episode is not provided, so you can’t watch the entire story without both sets. Fox did not provide us with the Bones set, so that I never did catch that full story. This is something I hope they change in the future. You get all 18 episodes of this show along with deleted scenes and a gag reel. Again, you don’t get the full crossover episode. “That was not very sporting.”

Gino Sassani is a member of the Southeastern Film Critic's Association (SEFCA). He is a film and television critic based in Tampa, Florida. He's also the Senior Editor here at Upcomingdiscs. Gino started reviewing films in the early 1990's as a segment of his local television show Focus. He's an award-winning recording artist for Omega Records. Gino is currently working on his 8th album Merchants & Mercenaries. Gino took over Upcomingdiscs Dec 1, 2008. He works out of a home theater he calls The Reel World. Favorite films: The Godfather, The Godfather Part II, The Body Snatcher (Val Lewton film with Karloff and Lugosi, not the pod people film), Unforgiven, Gladiator, The Lion King, Jaws, Son Of Frankenstein, The Good, The Bad And The Ugly, and Monsters, Inc.
Tuesday Round Up: January 10, 2017 Blair Witch (Blu-ray)