Posted in: Disc Reviews by Brent Lorentson on January 10th, 2017 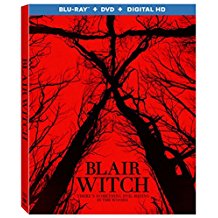 In 1999 The Blair Witch Project was released, and it was a horror film that created a stir like I had never seen before.  I remember going to Tampa Theatre to see it opening week.  The line was wrapped around the building for the sold-out screening.  Discussions were going on in the line about the film actually being real, some even talking about how they heard the bodies of the three filmmakers were never found.  It’s this kind of mindset going into the film that made it such an impact as I walked out of that first showing.  At the time I knew I had seen something unique, but I never would have expected it to spawn an entire style of genre filmmaking that would be copied over and over again. Now nearly two decades later, director Adam Wingard (You’re Next) attempts to inject new life in the found-footage genre and into the film franchise that started it all.

The film picks up years after the disappearance of the film students in the first film. James (James Allen McCune) has been looking for evidence since his sister first disappeared.  A digital video has surfaced that may have more clues as to what happened to his missing sister. It’s this hope that takes James and his friends to the woods where is sister vanished and where the legend of the Blair Witch continues to flourish. Lisa (Callie Hernandez) makes plans to document the trip to the woods as they hope to acquire this new evidence, and she comes armed with an array of high-tech gadgets to document the journey.

Tagging along on this adventure to find out what happened to Heather is Peter (Brandon Scott) and his girlfriend, Ashley (Corbin Reid). Normally these characters would be a bit generic, and in a horror film such as this you know there is likely going to be unpleasantness in their future.  I found myself rooting for these characters more so than the leads, simply because I feel they gave more depth than we’re used to seeing in supporting roles, and they anchored this in reality.  There’s a subtle sweetness to Peter as he looks after James; he knows this evidence is a fool’s errand, but he’s along for the ride because he cares for his friend.  It’s not something that is delved into deeply, but it’s there, and most importantly, it’s actually believable.

As the exploration of the truth dissolves into the group simply wanting to escape the woods, thankfully there are still more twists to be revealed that continue to propel the film and kept me more than just slightly engaged.  Having a larger budget of course allowed for bigger effects and bigger jump scares, but the film never seems to be bigger than the source film, though as the film eases into the third act and we arrive at the home where the original film ended, things take yet another twist.  I’m still on the fence about how things unfolded, but I appreciate that we have an ending that allows the opportunity for just as much discussion as the first film.

The less you know going into this film the better. The film was shot in secret and under the name The Woods. It wasn’t until it’s reveal at Comic Con in 2016 that the film’s real title and plot were released.  When the film first got released, it seemed to get panned by critics, and had less than stellar box office numbers.  I’ll be honest; the trailers didn’t do much for me, BUT I loved the idea of revisiting the franchise, especially after the awful sequel, Book of Shadows: Blair Witch 2.

I went into this film cautiously optimistic, and I had fun with this film.  What we have is a well-crafted film that is more impressive than I realized after I decided to watch the film again.  I understand the frustration with yet another found-footage film, but Blair Witch I feel managed to tap into what made the style fun and engaging in the first place.  The film starts off very much as a documentary. It feels very candid and natural as we get to know our characters, and we are briefly re-introduced into the mythology of the Blair Witch. Is there shaky cam?  Of course, but that’s to be expected. But the variety of cameras we get to see in the film is refreshing; we even get some fun drone shots, while a majority of the film is shot with “ear” cameras. It’s up to the audience to decide how they feel about the story. I was fine with this and had fun with it.  What’s not so debatable is the quality of the film; this is one of the best-looking well-crafted found-footage films.  This is the sequel the film deserved; unfortunately for audiences it came a decade too late.

Blair Witch is presented in the aspect ratio 1.85:1.  The 1080p image is arrived at with an AVC MPEG-4 codec at an average of 30 mbps.  For a found-footage film this looks great, but the quality is all over the place depending on what camera we’re supposed to be seeing things through. The resolution in the digital video as compared to what we also see in HD does offer us a divide in compression artifacts, but this is intentional to go along with the tone.  The greens seem a bit dulled down, while the sharpness of the night shots and low-light shots is impressive.

The DTS HD-Master Audio 5.1 track is subtle but immersive.  While we have some music in the front part of the film, the score is heavy on drones but fits into the film and functions well as a soundtrack. The dialog is surprisingly clear and is never drowned out by the also impressive track of sound effects that tease the creepy unknown that is lurking in the woods.

Commentary with Director Adam Wingard and Writer Simon Barret:  On the heels of their disappointing box office showing, the two seem disappointed in the response the film has gotten.  The guys are still proud of their film and really delve into the many aspects of making the film. A solid and informative track, without lulls and entertaining.

Never Ending Night: (1 hr 46 min) A six-part documentary about the making of the film. Mounds of information and material from the motivation for doing the film up to its release.  Plenty of behind-the-scenes footage on set, but also we get a look into the sound and editing of the film.  The final part is a Q & A with the filmmakers from the first screening.  I wish more films put this much effort into supplements.

House of Horrors: (15:50) Adam Wingard takes us on a tour of the impressive set of the house that was used for the final act of the film.  He happily dispenses information about many of the details.

This is the kind of film that disserves a little more love than it has gotten.  Sure, there are way too many bad found-footage films out there, but this is one of the good ones.  It’s hard to believe how many bad Paranormal Activity sequels did well but this didn’t.  If you’re looking for a creepy film to cozy up to while it’s raining or snowing outside, I’m pretty sure Blair Witch will conjure up a good time for you.

Brent Lorentson is a horror writer and film critic based out of Tampa, Florida. With a BA in Digital Film, he co-wrote and co-directed Scavenger Hunt. His short stories have appeared in various horror anthologies. In 2019 his short script Fertile Blood will be a part of the anthology horror film Slumber Party. He is currently working on his first novel A Dark and Secret Place set to be released in late 2019. Favorite Films: Taxi Driver, Fight Club, I Saw the Devil, The Wild Bunch, Dawn of the Dead, A Clockwork Orange, Pulp Fiction, Heathers, The Monster Squad, and High Fidelity.
Sleepy Hollow: Season 3 Girls: The Complete Fifth Season (Blu-ray)