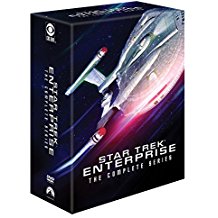 35 years, to be exact. Enterprise is the fourth spinoff from the original 1960’s hopeful series. The Earth is finally ready to send its first starship to explore the vast galaxy. This first starship Enterprise is smaller than the ships we’ve become used to. There are no shields or photon torpedoes. The transporter has only been cleared for inanimate objects. Not that this stands in the way of its occasional “emergency” use. The ship is very much like the cramped spaces of today’s submarines. It adds an even greater sense of reality to the show. The crew is composed of Captain Jonathan Archer (Bakula), First Officer and Vulcan High Command liaison, T’Pol (Blalock), Chief Engineer Charles (Trip) Tucker (Trinneer), Tactical Officer Malcolm Reed (Keating), Denobulan Dr. Phlox (Billingsley), Pilot Travis Mayweather (Montgomery) and Linguist/Communications Officer Hoshi Sato (Park).

With no Prime Directive to stand in their way (did it ever stop anyone before?) this crew has carte blanche to discover the wonders of the cosmos. Most of this season finds the crew battling new enemy, the Suliban. (Can anyone say Taliban?) A Temporal Cold War is also introduced that places the crew in the middle of factions from the future.

In the first season, episodes like Shuttlepod One demonstrate the return to episodes that play out as character studies. Remember the show that started it all had effects only slightly better than campy Lost In Space, another show salvaged by great characters. I am drawn by the idea of tension between humans, who have a genetic desire to explore, and the Vulcans, who do not consider humans ready for the intergalactic community. No doubt that Enterprise had incredible potential. I believe the show was just getting its space legs when UPN pulled the plug. Who needs thought-provoking social commentary when you can air Who Wants To Be America’s Next Super-Model?

In the second season the series did really find its legs. We start to get more of the episodes designed around the characters’ personalities and the relationships they share. There are some significant Star Trek mythology moments here.

As Season Two ended, we saw Earth attacked in the cliffhanger. An unknown weapon cut a huge path through central Florida and left seven million dead, including Trip’s sister. It was Star Trek’s method of dealing with the events of 9/11. When the third season begins, we find Enterprise being prepared to go after the race that attacked Earth with the knowledge that they are building a larger weapon, one that could destroy the entire planet. This spherical weapon must be stopped or the human race is doomed. Yes, the Enterprise is going after the Death Star.

There were cast additions this season. Since the ship was now on a military mission, a complement of special forces personnel were added. Steven Culp would head the group has Major Hayes. He was technically under Reed’s command, but the two would bump heads quite a bit, establishing a fierce rivalry.

There were some internal changes to the series. Manny Coto joined the writing and production crew, and it was obvious he was a fan. He’d really get to make his touch felt in the fourth and final season. The show also lost Jerry Fleck mid-season. He died during the season’s production. He was an AD.

Enter the Xindi, the species that attacked Earth. They are actually five different species that evolved on the planet at the same time. You have a reptilian species that serves as the most aggressive species. These guys are the gorillas on Planet Of The Apes. They are led by Commander Dolim, played by frequent Star Trek alien Scott McDonald. He’s the General Urko of the species. He hates humans and is league with a trans-dimensional species that is driving the Xindi to destroy Earth for their own purposes.

The other four species in the Xindi makeup are insectoids that are like small preying mantis creatures and are completely computer-generated. There are the aquatics, who look like manatees and are also computer characters. Arboreals are like sloths and are the philosophical thinkers of the group. Finally there are the primates, who resemble humans with the usual Trek facial bone prosthetics. This group is led by scientist Degra, played by another frequent Trek alien Randy Oglesby. He created the weapon, but like the scientists of the Manhattan Project on Earth, is having serious moral conflicts. The crew work to gain his trust as an ally.

On the surface, this sounds like a pretty good idea. They were almost ahead of the current trend of having a complicated season/series-long arc of mythology. The problem is that Berman and company began the idea without really locking down where they were going. They were literally making this up as they went along, and it shows terribly in the uneven pacing and plot. There’s plenty of evidence that Berman himself never fully committed to the idea. Writers were constantly told to prepare alternate episodes in case the Xindi story were to be jettisoned. Unfortunately, many of these ideas were integrated into the season to create some of Trek’s most awkward episodes.

What started with Star Trek: The Next Generation finally came to an end with the final episode of Enterprise.

Strangely enough, the season begins and ends with three of its worst episodes ever. But in between was pure Star Trek gold. Brannan Braga, the guy who brags that he was never much of a Star Trek fan, was getting burned out. The timing was right, because as fans we were getting burned out with Braga. Manny Coto moved up to the top spot in the writer’s room, and although we still had Rick Berman in his Fuhrer seat, Manny was not only a fan of Star Trek, he loved the ideals and the promise of the franchise. In his hands Enterprise finally embraced its origins and flew to its highest heights.

First those worst moments. When the Xindi story ended in season three, it ended with a cliffhanger that found Archer back in time to the days of World War II. This time there were alien Nazis. This wasn’t the history we all learned in school. The writers had painted themselves into a corner and ended up beginning the season trying to fight their way out of it. And while images of the Enterprise in a dogfight with World War II era planes might sound exciting, the episode was a loser and also closed the door for good on that whole stupid Temporal Cold War thing.

Then there is the season finale, which was a complete and utter slap in the face to the actors on the show and the fans who had supported it up to the bitter end… and beyond. Berman and Braga decided they had the right to finish the show and took it out of Coto’s hands. The result is actually an episode of Next Generation that has Jonathan Frakes returning as Riker using a holodeck simulation of Enterprise‘s adventures to help him make a decision we saw resolved in an episode of that show’s final season. Many of the actors let their feelings be known publicly, and they were right to do so. Some of them have calmed in the years since, but this was Berman and Braga’s final middle-finger salute to the very people who had allowed them and their families to live quite comfortably for so many years.

This is not the time to dwell on the bad when there is so much good to be found here. Coto decided to bring together threads from various episodes of both the original series and Next Generation. The result was a series of 2-3 episode arcs that allowed them to actually give us better production values on a smaller budget. By amortizing the costs of things over more than one episode, we were able to get sets and circumstances that weren’t even possible before.

CBS packages the first three seasons in one plastic case and provides the fourth in a standalone standard DVD-size case. All of the DVD extras from the individual releases are included, but not the exclusive Blu-ray material. There is a Blu-ray set coming, but we haven’t seen it, at least not to this point.

The show ended. Opinions varied, and blame was passed around. The sad fact remains that Enterprise ended when it was at its best. Then it ended with a whimper that was disrespectful to everyone. Berman and Braga are gone from the Trek universe. This set stands as a testament to what Trek could have been in someone else’s loving hands. Now, “These are the voyages…”

Gino Sassani is a member of the Southeastern Film Critic's Association (SEFCA). He is a film and television critic based in Tampa, Florida. He's also the Senior Editor here at Upcomingdiscs. Gino started reviewing films in the early 1990's as a segment of his local television show Focus. He's an award-winning recording artist for Omega Records. Gino is currently working on his 8th album Merchants & Mercenaries. Gino took over Upcomingdiscs Dec 1, 2008. He works out of a home theater he calls The Reel World. Favorite films: The Godfather, The Godfather Part II, The Body Snatcher (Val Lewton film with Karloff and Lugosi, not the pod people film), Unforgiven, Gladiator, The Lion King, Jaws, Son Of Frankenstein, The Good, The Bad And The Ugly, and Monsters, Inc.
The Accountant (Blu-ray) OPPO UDP-203 Ultra HD Blu-ray Disc Player