Posted in: Disc Reviews by Brent Lorentson on January 16th, 2017 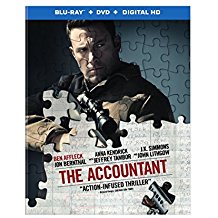 It would seem as though Ben Affleck is finally starting to shed the stigma of doing bad films.  He’s been on a roll since he took on the role of George Reeves in Hollywoodland and has also in the process become an accomplished director.  When the trailer first dropped for The Accountant, I wasn’t sure what to expect, but as you look at the laundry list of talent that fills the cast, it quickly became a film I had my eye on.  What is surprising is despite there being franchises that seem to cover the same territory i.e.: Jack Reacher and the Jason Bourne films, is there room for another lone-wolf killing machine film?  Before going into this it was a question that bothered me; heck, I’m already burnt out of the Jason Bourne films, and with a new Jack Reacher film on the horizon, the saturation is noticeable.  But thankfully, The Accountant doesn’t just come out swinging but exceeded all expectations and has raised the bar for this brand of action film.

Christian Wolff (Ben Affleck) is, as the title would lead you to believe, an accountant.  He runs his own firm and is exceedingly good at what he does when it comes to solving accounting problems people may have.  He’s exceptional at solving problems, and what makes this all the more impressive is he does all of this as a high-functioning autistic.  This may be one of the first times I’ve seen a character with a disability on screen, but not once is it ever played as a way to sway sympathy; instead, it’s just another layer to this character.  We see the everyday hell Wolff goes through, but we also see how far he’s come from his childhood after his mother gives up hope and abandons her family.

The story has two narratives; one involves Wolff being hired on to discover some accounting gaffes for a robotics company run by Lamar Black (John Lithgow). The other storyline follows  Marybeth Medina (Cynthia Addai-Robinson), a treasury officer with a checkered past, who is put onto the case of finding the identity of an accountant who has worked with some of the world’s most wealthy and dangerous leaders. Medina’s boss, Ray King (J.K. Simmons) has been following leads for years but is about to retire, though he has hopes he’ll uncover the accountant’s identity before he hangs his hat for the last time.

Just seeing the talent working together is worth the price of admission, and when we get to meet the charming yet awkward Dana Cummings (Anna Kendrick) who discovers the accounting errors, we are more than invested in this story.  So where is the action? Well a team of highly trained assassins are hired to eliminate those involved with the accounting cover-up at the robotics company and very quickly Wolff and Cummings find themselves in the crosshairs.

While the film plays out, we are given scenes that flash back to Christian’s childhood and how he learned to adjust to his autism, but also how he learned to be a trained killer.  These moments set up for some nice twists along the way. Most of them you can see coming from very early on, but it doesn’t matter, because everything else in this movie just works so well.  What I found as the biggest surprise is how funny the film actually is and manages to have a heart without being cheesy.  I mean, for a film with such a bland title, it has so much going for it that I can’t help but want to see more with this character.

Director Gavin O’ Conner has been a director who for years has been scratching at greatness; Miracle is easily one of the best sports films done in years.  He’s been a director who has always managed to pull out some very touching performances from his male stars while never losing their toughness; another example of this would be Warrior. But just as much credit needs to be given to Bill Dubuque for writing what may be the best action/drama of the year.  He doesn’t just throw characters into cool situations and have them say clever things; instead he’s created a script that injects so much depth to each of the characters where any one of these characters could have a film of their own.

This is simply one of the best films of the year so far. I’m hopeful this can get some awards attention for its script, but mostly I hope this is a film that finds its audience.  It’s so rare that Hollywood manages to churn out a film that is so smart and fast-paced while achieving commercial appeal.  In a perfect world I’d love to see Christian Wolff have a showdown with Jason Bourne, perhaps even John Wick; either way, all I can hope for is that the story of The Accountant is not complete just yet, and that he’ll be back to do our taxes and kill a bunch of people in the sequels that will hopefully follow.

The Accountant is presented in the aspect ratio 2.40:1.  The 1080p image is arrived at with an AVC MPEG-4 codec at an average of 28 mbps.  There are two sets of color palettes going on in the film.  When the film follows Christian Wolff we have a very cold monochromatic look with blues, blacks, and whites.  The color choice here is one that is very reflective of the autistic nature of the character.  While we do get plenty of detail that is captured, there is a higher range in the depth of the blacks to be desired where some detail gets lost.  In the scenes without Wolff, the film takes on a warmer and more robust look. In the close-up and medium shots the detail is fine, but in the wider shots, though they look nice, some detail gets lost.  I enjoyed the look of the film and thought it worked in reflecting the separate lives that are running parallel here.  I didn’t notice any compression artifacts.  While this isn’t a transfer that will amaze the viewer, it’s still nicely done.

The DTS-HD Master Audio 5.1 track is what you’d expect from an action thriller. Throughout the film the dialog is clear, down to some of the autistic tics that the Wolff character has.  More impressive are the effects layered in for the gun battles and fighting sequences. There is a reasonable amount of bass used, but it never gets too overpowering.  The gun hits through the silencer sound pretty cool here.

Inside the Man: (10:38) The standard featurette with the cast discussing the story of the film and how they identify to the characters. There’s more added discussion revolving around the disability that Christian Wolff faces.

Behavioral Science (8:04) The cast and crew discuss the effort that was put in to depict Christian Wolff’s condition in the most realistic way while giving more detail about what autism is.

The Accountant in Action: (7:14) A look into the fighting styles and the weapons used in the movie.  We get some brief looks into the training the actors had to accomplish the intense action sequences.

After getting to revisit the film, I’m glad to say it still holds up, and I really hope we get to see more with this character down the road. Considering how Jason Bourne was a bit of a disappointment, it’s fortunate this movie is more of a standout at the box office.  This was one of my favorite releases of 2016 and a title I know I’ll be revisiting several times down the road.

Brent Lorentson is a horror writer and film critic based out of Tampa, Florida. With a BA in Digital Film, he co-wrote and co-directed Scavenger Hunt. His short stories have appeared in various horror anthologies. In 2019 his short script Fertile Blood will be a part of the anthology horror film Slumber Party. He is currently working on his first novel A Dark and Secret Place set to be released in late 2019. Favorite Films: Taxi Driver, Fight Club, I Saw the Devil, The Wild Bunch, Dawn of the Dead, A Clockwork Orange, Pulp Fiction, Heathers, The Monster Squad, and High Fidelity.
The Orphan Killer Star Trek: Enterprise: The Complete Series