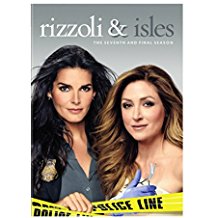 The premise here was always dirt simple. They’ve taken the buddy cop idea and found a way to work in the forensics science fad and deliver a procedural with a few twists. The show is based on a series of mystery novels by Tess Gerritsen, who introduced us to Jane Rizzoli & Maura Isles in 2001. Tess makes a cameo appearance in this, the show’s final season. The season is shorter than the usual 18 shows. There are 13, and in all of them you can feel the weight of the characters and their situations counting down until the final episode of the series. You’ll be able to see where that’s going pretty much from the beginning. After seven years, you can look forward to a tearful goodbye as the show exits on its own terms.

Angie Harmon plays Detective Rizzoli. She’s wanted to be a cop all of her life and is living the dream, working with a special unit out of Boston PD. Her best friend in life happens to be Dr. Maura Isles, who is the Chief Medical Examiner for the unit and is played by Sasha Alexander. These are the kind of friends who finish each other’s sentences and share a lot of history together. That’s not to say they are at all alike.

Jane Rizzoli comes from a family of cops. She’s more of a playboy who likes to mix it up with the guys. She’s got a temper and a love for the simple things. She’s a good detective because she’s like a bulldog when she’s on a case. She doesn’t worry about the niceties, and she’s loyal to a fault. But Rizzoli is finding out that she might be good at something else this season that also happens to come with a love interest which you can expect to be only teased until the wrap-up.

Dr. Isles is a bit of a Bones clone. She has difficulty in social settings at times, and she is an encyclopedia (for those of you under 20, look it up) of information. She has an obsessive need to cite research when confronted with a situation. She has the Spock-like aversion to making a guess or speculation of any kind. There’s a little of Monk’s OCD going on here as well. In spite of the differences, they work well. Each fills in for the other’s deficiencies, and criminals don’t stand a chance against them. The Doc suffers an injury early in the season that calls her ability into question. It will lead to the kind of soul-searching that sets her on her series finale path.

The detective unit includes Vince Korsak, played by McGyver’s favorite con man, Bruce McGill. He’s an easygoing guy here who manages to do the job quietly. He’s very much the heart of the unit and finds himself slowing down. There’s a lot of talk about retirement. He’s also found a new partner and fiancee in the finally-revealed Katie. He also hedges his retirement by buying the bar where the gang usually hangs out. Maybe that hedge is about to become something more.

Jordan Bridges is Jane’s brother and a detective on the squad, Detective Frankie Rizzoli. Frankie’s eager to please and soak up as much as he can. Of course, he’s very green and prone to rookie mistakes. Together they basically solve a new crime each week. This season he ends up getting together with Nina Holiday, played by Idara Victor, the computer tech of the team. For them the season becomes a tease of how far will they go and how long they can hide the relationship from everyone else.

Dr. Kent Drake, played by Adam Sinclair, continues to be the show’s comic relief. OK, more so than all of the other characters’ comic antics. He’s a Scottish doctor who needs to put in some time to get another job. There’s pretty solid chemistry between him and Isles from the start. The show has developed a kind of annoyance/attraction dynamic between the two.

The show’s mythology arc is found with the friends’ family lives. The Sopranos’ Lorraine Bracco is the Rizzoli matriarch, Angela, who used to run the cafe inside the precinct and now work’s for Vince at his new bar. The family stuff is the framework around which the crime of the episode is broken up. The lightness of the relationship is a nice balance to the often grisly and intense crimes the pair is called upon to investigate.

It all ends with the final 13 episodes and a Gag Reel. I’m disappointed that there weren’t some extras to bring us into those final hours of shooting. I have to believe that the show’s fans were looking forward to some of that kind of content. Sorry, guys. There’s none of it there. You’ll have to just take these final episodes so that you can continue to watch for years to come. “Think of it like starting a new life.”

Gino Sassani is a member of the Southeastern Film Critic's Association (SEFCA). He is a film and television critic based in Tampa, Florida. He's also the Senior Editor here at Upcomingdiscs. Gino started reviewing films in the early 1990's as a segment of his local television show Focus. He's an award-winning recording artist for Omega Records. Gino is currently working on his 8th album Merchants & Mercenaries. Gino took over Upcomingdiscs Dec 1, 2008. He works out of a home theater he calls The Reel World. Favorite films: The Godfather, The Godfather Part II, The Body Snatcher (Val Lewton film with Karloff and Lugosi, not the pod people film), Unforgiven, Gladiator, The Lion King, Jaws, Son Of Frankenstein, The Good, The Bad And The Ugly, and Monsters, Inc.
Tuesday Round Up: January 17, 2017 The Girl on the Train (UHD Blu-ray) (4K)