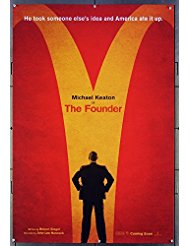 “I know what you’re thinking: How the heck does a 52-year old milkshake machine salesman build a fast food empire with over 1600

restaurants and an annual income over $700 million? One word:” The Founder.

When I was very young, my mother dressed up as Ronald McDonald for a McDonalds block party for a charity benefit. In those days McDonalds helped organize these things, including the provision of said Ronald McDonald outfit. I was just a kid, but seeing my mother put on the costume kind of killed the last of the childhood fantasies. I guess we all thought Ronald was the guy who invented McDonalds. We thought he was the founder. I figured that was the big reveal. That was until I saw The Founder, which tells the story of the actual franchise founder Ray Kroc and how he created one of the most recognizable brands in history. McDonalds and Coca Cola were as much responsible for the fall of Communism around the globe as Ronald Reagan
or Gorbachev. I would bet there isn’t an American citizen who has not eaten at the Golden Arches at least once in their life. It’s an American institution, and this film tells the rather sad story of how that came to be.

Ray Kroc (Keaton) is a traveling salesman selling milkshake machines. It’s not just the lack of sales that have him down. He’s also finding that drive-in service around the country pretty much sucks. Then he finds out that a couple of brothers in California have just ordered six of his machines. Has to be a mistake, right? He calls, and sure enough it was a mistake. They really need eight, and can he get them there ASAP? Curiosity piqued, he makes the trip to check on the two brothers Dick (Offerman) and Mac (Lynch) McDonald. He finds a well-oiled machine. The brothers have revolutionized roadside food. They made it fast and uniform. It was an idea he couldn’t pass up, so he pestered the brothers into letting him franchise their idea. The rest is history, or so you might think.

I’m a bit surprised to find that director John Lee Hancock and screenwriter Robert D. Siegel didn’t pull any punches telling this story. You enter the film almost like you’re about to witness the origin story of some superhero. I mean, McDonalds likely has more name recognition than Superman or Spider-Man. But the film is really about how money and profit can corrupt a guy. Before long Kroc has hijacked the brothers’ idea and pretty much shut them out of their own creation. It’s not a flattering story. But it’s told with the kind of steady evolution that adds some credibility to the telling. Kroc doesn’t start out as a bad guy. He’s actually a hardworking joe who has pretty much reached the end of the line. You also get the sense that he actually admires the brothers and starts out with absolutely no intention of hurting anyone. As Michael Corelone used to say, “Friendship and money; oil and water”. By the end of the film you will not have any charitable opinions of Ray Kroc, but will that stop you from getting a Big Mac on the way home from the theatre? Probably not.

The real gem of the film, however, isn’t that refreshing and honest storytelling. It’s the solid performances. Michael Keaton is set to head over to the Marvel Universe and take on Holland’s Spider-Man as the classic Vulture character. That might be no small coincidence when you consider that the veteran actor finally got his first Oscar nomination for playing another avian comic book character in Birdman. Keaton makes a case for a second nomination for his portrayal as Ray Kroc. I love when characters go through paradigm shifts and you can see it the instant it happens. Think Al Pacino in The Godfather or Clint Eastwood in Unforgiven. Unlike Kevin Costner in Dances With Wolves. You really get to see the evolution of this character and can almost pinpoint to the film frame (if they had actually used film) that Kroc goes over to the Dark Side. Add that moment to a pretty solid job of immersing himself in this character and it’s my early favorite for Best Actor next year. Of course, early performances rarely make the cut. But Keaton deserves it nonetheless.

Then there are the two brothers. This was a really fun watch. You have two guys who work together in almost perfect synchronization, but they are very different guys when it comes to Kroc and his ideas. Nick Offerman plays Dick McDonald, who really wants to believe that the sky is the limit. He’s excited and hopeful about the prospects. Then there’s John Carroll Lynch as Mac, who is cynical from the start. These are the characters who bring out the heart of the film. You really start to feel for these guys before very long at all.

The film has a pretty quick pace and doesn’t linger on a lot of bells and whistles. It’s tight at just under two hours, a running time that sounds heavy but slides by faster than you might expect. It’s really a bit of a Garden of Eden story. We have a little slice of paradise until a certain snake gets invited in. Deal with the Devil or Monkey’s Paw warning of “be careful what you wish for”. It’s all of that and a little bit more. All you really need to decide is, “Would you like fries with that?”

Gino Sassani is a member of the Southeastern Film Critic's Association (SEFCA). He is a film and television critic based in Tampa, Florida. He's also the Senior Editor here at Upcomingdiscs. Gino started reviewing films in the early 1990's as a segment of his local television show Focus. He's an award-winning recording artist for Omega Records. Gino is currently working on his 8th album Merchants & Mercenaries. Gino took over Upcomingdiscs Dec 1, 2008. He works out of a home theater he calls The Reel World. Favorite films: The Godfather, The Godfather Part II, The Body Snatcher (Val Lewton film with Karloff and Lugosi, not the pod people film), Unforgiven, Gladiator, The Lion King, Jaws, Son Of Frankenstein, The Good, The Bad And The Ugly, and Monsters, Inc.
Broad City: Season 3 The Babymooners