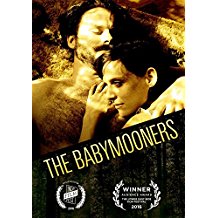 If asked about my favorite genre of film, romantic comedies would not be close to the top of the list. However, I have seen enough rom-coms that I wouldn’t mind watching a second time. The Babymooners would be a film that I’d give a second watch, simply because of its charming energy. Most of this charm can be attributed to Shaina Feinberg and Chris Manley, who co-wrote and directed the film. Through explicitly stating in the synopsis that the film is “clearly influenced by old Woody Allen films,” the filmmaking duo alert audiences to exactly what they should be expecting, and they are not far off. So if you are a fan of Woody Allen, rejoice, as that is not an empty promise.

Part documentary, part sketch comedy, part smart storytelling, The Babymooners is a story about a middle-aged artistic woman named Shaina, who is concerned about losing her creativity with the coming child. Set up as a video letter to her unborn son, she recounts the events that led to the conception, as well as details the complexities within the relationship between her and her partner. These events are largely told in vignettes, that are prefaced by either Shaina talking to her computer, or a talking-heads-style interview with Shaina’s parents recounting their experience with her.

The structure of the film is actually very smart. It is extremely obvious that this film is inspired by old Woody Allen treasures. Like I said previously, if you are a fan of Woody Allen, I would be very surprised if you do not enjoy this film. The vignettes are very segmented, but they fit together cohesively through the thematic conversations framed by Shaina and her parents. Clocking in at an hour and fifteen minutes, not a single second is wasted in this film. From my experience, this is an impressive feat when it comes to independent films. The cohesive nature of the film comes from the writing, both story and dialog. Although some of the comedic vignettes were duds in my book, they never hurt the tone of the film, because they made sense of how Shaina was feeling about that particular scenario.

Perhaps the most impressive thing about this film is that I really think they filmed the progress of Shaina’s actual pregnancy, revealing their newborn child at the end. Considering the typical timing of a pregnancy and possible complications, the fact that one of the film’s strengths is pacing speaks volumes to Feinberg and Manley’s talents. I want to say that I had heard this specific concept (filmmakers making a film about having a baby) while I was still in film school, but I would have never expected anything of this caliber to come out of the concept itself.

In addition to the clever writing and the impressive painting, Feinberg and Manley don’t stop at production to impress. Many of the scenes feature really creative editing sequences with interesting jump cuts and tasteful overlays. With all of that combined with a great, minimalistic soundtrack by Brian Flood, Marshall York, and Jon Sherman, the film is a surprising little package. While it does capture the magic of older Woody Allen films, The Babymooners feels less pretentious. Overall, this is a nice addition to any DVD collection.