Posted in: No Huddle by Brent Lorentson on January 27th, 2017 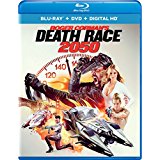 Before there were The Hunger Games or even The Running Man, there was a tiny little B-Film called Death Race 2000.  Long before the remake occurred with Jason Statham as the lead I was a fan of the original, and for all the wrong reasons.  I thought it was great, the notion of having a point system for people you’d hit with your car, the kind of thing you’d joke with friends about, but would never actually go through with.  With David Carradine wearing the black mask as immortal Frankenstein behind the wheel of his death machine, he was fun to root for.  I’m pretty sure, though, it was a young Sylvester Stallone as the bloodthirsty Machine Gun Joe who got so many people to see the original.  I’ll be honest, it’s what got me to rent the VHS, hoping to see Rambo in action, but instead it just opened my eyes to a new kind of cinema cool I wasn’t expecting.  I’ve seen the original film at least a dozen times, and it always delivers the over-the-top fun that films of the 70’s embraced. Now that Roger Corman has decided it is time to dust off his film and give it a reboot for a new generation.  Even with a bigger budget and more affordable technology, is it a wise decision to once again attempt to update a classic? There’s only one way to know for sure. Strap in, folks, because things are about to get messy.

It’s supposed to be the year 2050, and the government has developed a cross-country death race to hopefully whittle down the population while entertaining the masses in the process. The returning champ is Frankenstein (Manu Bennett). He’s the fan favorite in a leather suit and always wears a leather mask.  It’s hard to understand why he’d be such a beloved favorite, but this is a world that embraces a ruthless killing machine.  Other drivers are Minerva (Folake Olowofoyeku), a stylish hip-hop/Mad Max inspired mash-up, Jed Perfectus (Burt Grinstead), an egocentric madman who wants to be number one and adored by everyone, and then there is Tammy (Anessa Ramsey), an all-American religious leader who loves to pray and kill.  It’s a fun batch of drivers, along with a car that is controlled by AI that is simply known as Abe (voiced by DC Douglas).  The characters are all over the top, but unfortunately there is nothing in the way of depth to be found here.  There is an attempt at giving Frankenstein a deeper story, one that is far from being original, but really what’s going for the film is that you don’t watch a movie called Death Race 2050 and expect a heartwarming character study.  Instead, you’re here to be entertained, and it does so.

As the drivers race across the country, the film manages to get sillier with the group of journalists commenting on the race and giving updates on kills. I think the one thing introduced into the film that actually was kind of cool is virtual reality.  It’s a system that allows fans at home to see, hear, and even smell the experience from their homes. With the way technology is coming along and how VR systems are quickly becoming more affordable, this is one of the few gimmicks that feel as though it could be a real thing in the not so distant future.

What is somewhat of a glaring problem with the film is how computer-generated the whole film looks.  What worked about the first film is that it utilized matte paintings, but as a whole it was all shot with practical effects.  In a side-by-side comparison of the two films, I can’t help but lean towards Death Race 2000 as being the superior film.  Everything from the digital effects, costumes, and even the designs for the car just fail to impress and resemble something closer to what I’d expect at a cosplay event I’d see at a comic expo.

It tries, it tries so very hard to capture the feel of the old Grindhouse era and even attempts to steal from Mad Max to hopefully snag some new fans, but the film just can’t seem to deliver.  There is a charm to the film; despite how bad a lot of this may be, it’s still fun to watch.  This film isn’t for everyone; heck, I’m still trying to figure out my love/hate scale for this one, but I can’t deny that it’s at least a fun little ride.

If I’m being honest, this film is a bit of a dud and a waste of time.  I’d recommend the original or even the big-budget remake over this.  If you’ve had a lot of drinks and are looking for something silly to watch on Netflix, then I’d say give this a shot, but keep those expectations low.

Brent Lorentson is a horror writer and film critic based out of Tampa, Florida. With a BA in Digital Film, he co-wrote and co-directed Scavenger Hunt. His short stories have appeared in various horror anthologies. In 2019 his short script Fertile Blood will be a part of the anthology horror film Slumber Party. He is currently working on his first novel A Dark and Secret Place set to be released in late 2019. Favorite Films: Taxi Driver, Fight Club, I Saw the Devil, The Wild Bunch, Dawn of the Dead, A Clockwork Orange, Pulp Fiction, Heathers, The Monster Squad, and High Fidelity.
Tuesday Round Up: January 24th, 2017 Tuesday Round Up: January 31, 2017