Posted in: Tuesday Round Up by Gino Sassani on January 24th, 2017 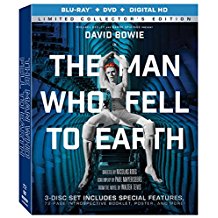 Howdy, Partners. Johnny’s a bit out to sea at the moment. Actually, he’s taking a cruise with Katie on that long-overdue honeymoon. I sure hope Tom Hanks isn’t driving the boat. Guess you’ll find out next week. For now, you’re stuck with me for this week’s release/review round-up.

Lionsgate is down for David Bowie’s cult classic The Man Who Fell To Earth in a collector’s edition Blu-ray. Baby will fill us in on A Dog’s Purpose in this week’s theatrical releases. National Geographic and Fox will scare up Sea Monsters on DVD. Maybe I should have passed that one on to John. It’s a slow week but there’s tons of stuff on the horizon.

Gino Sassani is a member of the Southeastern Film Critic's Association (SEFCA). He is a film and television critic based in Tampa, Florida. He's also the Senior Editor here at Upcomingdiscs. Gino started reviewing films in the early 1990's as a segment of his local television show Focus. He's an award-winning recording artist for Omega Records. Gino is currently working on his 8th album Merchants & Mercenaries. Gino took over Upcomingdiscs Dec 1, 2008. He works out of a home theater he calls The Reel World. Favorite films: The Godfather, The Godfather Part II, The Body Snatcher (Val Lewton film with Karloff and Lugosi, not the pod people film), Unforgiven, Gladiator, The Lion King, Jaws, Son Of Frankenstein, The Good, The Bad And The Ugly, and Monsters, Inc.
The Babymooners Roger Corman’s Death Race 2050