Posted in: No Huddle by Dan Holland on February 1st, 2017 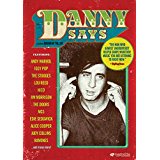 The 1960s were very important to the counterculture movement in the United States, most notably the artists of New York City. Whether it be future rock stars such as Iggy Pop and The Stooges and The Doors, or the enigmatic Phenom Andy Warhol, New York was at the crux of a lot of influential ideologies that have inspired us in the succeeding decades. However, there is only so much you can read about when it comes to discovering the cultural history of New York. That’s what makes documentaries like Brendan Toller’s Danny Says so fascinating: Sure, you know the history, but can you glean what the experience would be like? Danny Says takes you on a journey beyond the facts and delves into the personal experiences of one of the most significant music journalists New York has seen.

Danny Fields (born Daniel Fienberg) is a fascinatingly pivotal individual for the music scene that defined a generation. As the documentary unfolds, you cannot help but be struck by his connection to the counterculture movement: he spent some time within the walls of Andy Warhol’s factory, he befriended Alice Cooper and Iggy Pop, and he singlehandedly started the press division of Elektra Records. These are impressive feats and awe inspiring facts that really would not carry the same weight if I had read them in a history book. Danny Says is a medium that aided Danny Fields in getting his story told the right way.

At first, the documentary felt as if it was going to be hard to stomach. Prior to credits rolling, we received a lot of talking heads style interviews explaining who Danny was in an extremely segmented way. If anything, that just tries your patience. Using segmented interviews in order to shroud your subject in mystery is a rather overused trope in documentary filmmaking. Once you are able to see through the introduction, the only other hindrance provided by the film is its length. Perhaps I am being a little harsh, but the film did not need to be an hour and forty-five minutes long. Certain portions of the story, though interesting, could have been cut for time, especially considering that the film did take great strides to be different. The extra information really started to get in the way of what made the film memorable in the first place.

The documentary is comprised of four main visuals: interviews with Danny himself, interviews with other musicians about Danny, still photographs/video of the music scene in New York, and brilliant, unique animations. The latter is what adds a flare that I had never seen before. Basically, it begins with Danny telling a story, but the visual fades from his talking head into a very surreal (dare I say psychedelic) animated sequence. The film does this a lot, each time with a new animator, which really added an intense variety that demanded to be watched. Not only are you listening to whatever insane, “behind the scenes” story Danny was telling, you also are able to watch an artist’s ridiculous visual interpretation of that very story. It gets wild.

Bottom line, if you have any interest in the counterculture scene of the 1960s, this doc is a must have. We’ve all seen documentaries that can stand to be trimmed, but this one is still worth the watch. Danny’s personality is an excellent representation of the attitudes during the decade and he is just fun to watch. I would have liked to hear more of his musings, but Danny Says does deliver more than enough entertaining history to enjoy.