Posted in: Disc Reviews by Archive Authors on February 1st, 2017 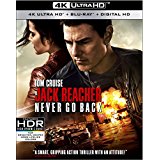 Forbes magazine called Jack Reacher and author Lee Childs the strongest brand in publishing as much for his over $100,000,000 in sales and billion-dollar imprint as for the strong loyalty of fans and favorable ratings of the readers. The 21st Jack Reacher novel, Night School, is coming out in a couple of weeks (which I’m sure Simon & Shuster would thank me for mentioning, but they don’t need my help), and Reacher fans will be buying in droves. The second Reacher movie will be out on November 21. One of the first things I want to address is that Lee Childs had been actively involved in the picking of Tom Cruise to be Jack Reacher. It was a controversial decision, but Childs rightly said there are no big movie stars who could accurately portray the physical characteristics of Reacher. I personally am 6 ft. 4in tall and 250 pounds, so I could be a close proximity except for the fact that I am not a movie star nor could I disable eight opponents simultaneously. The closest movie star I could name who approximates Reacher’s physical dimensions is Vince Vaughn, and I doubt anyone would say he is as big a movie star as Tom Cruise (box-office-wise, that is). Five Mission Impossible movies alone demonstrate that Cruise’s box office is as strong as ever based on their increasing popularity.

By next week, there will be 21 books to read, which contain a lot of developing characterization. The essential information about Jack Reacher is that he retired as a major at 36 and now roams the country with no luggage. It has been said the books can be read out of sequence.

Jack Reacher: Never Go Back, the second movie in a potential franchise, takes Reacher back to Fort Myer in Arlington, Virginia where he had been the Military Police Commanding Officer. He is visiting the current CO, Major Susan Turner (Cobie Smulders). Smulders is well known from The Avengers I & II and How I Met Your Mother. When Reacher arrives, he finds Turner is jailed for espionage. She has forbidden Reacher to visit her in jail. Reacher also finds out he is being sued for child support despite having no knowledge of the mother or child.

All of the Reacher books and movies are police procedurals. It is one of the most popular forms of entertainment, especially on television, where the top of the ratings charts have been crowded with titles like NCIS, CSI, Criminal Minds, Law and Order, etc. It’s a different kind of vehicle than Mission Impossible, and I think Cruise brings his exemplary standard of commitment and intensity to the franchise. Cruise is known for his high-voltage smile, but Reacher never smiles.

Jack Reacher: Never Go Back is presented in its original aspect ratio of 2.35:1. The Ultra-high-definition image is arrived at by an HEVC codec with an average bitrate of 65mbps. The rate jumps as high as 110 mbps. We’re finally able to provide better specs with the use of Oppo’s UDP-203. At first glance this is not the kind of film you would think about seeing in 4K. The color reproduction is spot-on, but this is not a very colorful film to begin with. Yes, you get incredible sharpness and fine resolution. But it’s the action that benefits most from this presentation. There are car chases and many shots of Reacher running full out. The scenery that whips by shows remarkable improvement over the Blu-ray. What should be a blur actually fine-tunes into a rather detailed moving landscape. It’s the first time that particular aspect of the 4K media has been brought to my attention. Motion is absolutely awesome in this release. It’s what you might expect from a higher frame rate. Black levels are deep and true, providing plenty of detail and sharpness in the shadows.

The Dolby Atmos presentation defaults to a nice 7.1 track. I can never get enough of the whiz sound of bullets flying all around the theatre. You get plenty of that here. The score is dynamic and pulse-pounding both in the subs and higher ranges. Still it allows space for those nice surround effects that immerse you in this adventure. Dialog always cuts through even with Cruise trying so hard to remain soft-spoken and calm in his speech. The subs do more than bring out the score. There’s plenty of explosive moments as well as a hyper-realistic fireworks display during the climax.

Reacher Returns: (11:31) This one starts as a bit of a Reacher character profile and moves through the selection of the particular Reacher novel used to finally a synopsis of the film.

An Unexpected Family: (14:31) Cast and crew take us through the characters and their relationships and interactions. There’s also a ton of production footage that allows us to have a glimpse into the relationships between the actors. Cruise spent a ton of time mentoring the young Danika.

Relentless – On Location In Louisiana: (25:45) We get a look at the important New Orleans-area locations and how they also doubled for places like D.C. with the help of a little computer wizardry.

Take Your Revenge First – Lethal Combat: (12:40) Here’s a really nice look at the action scenes. There is a lot of behind-the-scenes footage so you get a more intimate look than these things usually provide.

No Quarter Given – Rooftop Battle: (8:13) This looks at the climactic scene and once again provides a lot of production footage.

Reacher In Focus With Tom Cruise And Photographer David Jones: (8:33) The pair talk about the role of a still photographer on the set and focus on the 75-year-old veteran.

I’d like to see more Reacher movies. They are easy and reliable entertainment, and Cruise is obviously committed to making the series pay off. The fans of the book have to get on board with the fact that Cruise is not 6 ft. 5in. It’s not much different than what you see on TV, but so what? I especially enjoyed the chemistry between Cruise and Smulders. Make another 20 Reacher movies, Tom. I’m behind you.