Posted in: The Reel World by Gino Sassani on February 5th, 2017 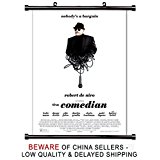 Robert De Niro is arguably one of the most talented actors living today. There’s little doubt that he’ll long be remembered as a legendary force in motion picture history. But there has long been a downside to the iconic actor. He hasn’t had a good starring role in over a decade. It looks too often as if he’s been more interested in chasing a likely unneeded paycheck than adding to his already established legacy. For every Godfather Part 2 or Deer Hunter, there’s a Dirty Grandpa or Fockers sequel. For each Good Fellas or Raging Bull, there’s a Stone. And since the turn of the millennium, De Niro has gravitated more and more to comedy. While I actually liked the Analyze films, I have found myself cringing most of the time. De Niro has always had a stare that can look right through you, but he has the worst forced laugh in Hollywood. So I was more than a little cautious when I went to see The Comedian.

De Niro stars as Jackie Burke, a washed-up “insult” comedian. By insult comedian we’re not talking Don Rickles variety here. We’re talking more like Andrew Dice Clay. By insult we’re talking F-bombing one’s way through a performance. He’s playing dives or wherever he can score a few bucks. He’s most known for a vintage television series called Eddie’s Home where he played a police officer with a Jackie-Gleason-like trademark line that he’s too often asked to perform both on stage and in the street. When one of his gigs is crashed by an internet video blogger, violence ensues and Jackie spends six months in jail and then has to do 100 hours of community service. That’s where he meets Harmony, played by Leslie Mann. They have a bit of a flirtatious relationship and she invites him on a “date” to meet her domineering father, played by Harvey Keitel, who happens to be an “Eddie” fan, and meeting Jackie is a birthday present of sorts. All the while Jackie’s manager, played by Sopranos star Edie Falco, tries to get his career going again. A few viral videos of Jackie give him the chance to get back on top. As his career climbs, Harmony is bullied into moving back to Florida to work for her father’s resort. Of course, dad also doesn’t want her involved with Jackie. When she stops answering his calls or texts, Jackie decides to confront her, with surprising results.

The Comedian has been one of those gestating projects for several years that never could get off the ground until now. Unfortunately, the film has all of the earmarks of a production with a too-long development and perhaps too many chefs. The pacing is a frustrating mess. The movie meanders through a series of situations that never seem to get brought together in a satisfying narrative. Each time the film approaches some real heart and emotion, it’s bungled by a Jackie performance that will have you squirming in your seat a bit, or the moment is too quickly thrown away in the service of moving on. The most unforgivable of these cinematic crimes has to be a coda that is both unnecessary and mood-killing.

De Niro is surrounded with an incredible cast that includes Danny De Vito as his brother. The two share some rather nice chemistry, and their moments are the best scenes in the film. This is where the film gets close to delivering heart, but there isn’t a single one of these wonderful moments that isn’t either squandered or destroyed by a lazy, cheap stab at blue comedy. The most egregious involves a wedding scene that promises to provide some satisfying moments between Jackie and both Harmony and brother Jimmy. It’s all flushed by forced rancid humor that defeats everything it had built. Cloris Leachman is one of many cameos that also provide moments that just can’t quite deliver the goods. The same can be said for an Analyze This/That reunion of De Niro and Billy Crystal that promises more than it delivers. Like good ol’ Maxwell Smart used to chide us: “Missed it by that much”.

In the final analysis The Comedian is entertaining enough to allow for a couple of hours of entertainment, but  it comes truly close to being so much more. There’s a slight promise that De Niro might be back on his game as far as his acting is concerned. That would be a welcome turn of events. The Comedian will pass as just the latest in De Niro’s resume of comedy, and it’s quite funny at times. “Being funny is not enough anymore.”

Gino Sassani is a member of the Southeastern Film Critic's Association (SEFCA). He is a film and television critic based in Tampa, Florida. He's also the Senior Editor here at Upcomingdiscs. Gino started reviewing films in the early 1990's as a segment of his local television show Focus. He's an award-winning recording artist for Omega Records. Gino is currently working on his 8th album Merchants & Mercenaries. Gino took over Upcomingdiscs Dec 1, 2008. He works out of a home theater he calls The Reel World. Favorite films: The Godfather, The Godfather Part II, The Body Snatcher (Val Lewton film with Karloff and Lugosi, not the pod people film), Unforgiven, Gladiator, The Lion King, Jaws, Son Of Frankenstein, The Good, The Bad And The Ugly, and Monsters, Inc.
Rings Zero Days