Posted in: No Huddle by Jeremy Butler on February 6th, 2017 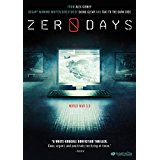 What do you know about the Stuxnet virus? It’s all right, you can be honest. If I’m being honest, before the documentary Zero Days, I hadn’t even known the name. After watching the film, my knowledge is stemmed more in speculation than fact. I hadn’t realized how many different ways there were to hear, “I can’t talk about that.” To this day, government officials refuse to answer any question regarding the computer virus that was supposedly designed to thwart Iran’s nuclear program. It is incredibly frustrating and has inspired in me a degree of curiosity that I hadn’t known possible beforehand. I can see why it the filmmakers were drawn to this subject matter.

Through a panel of computer experts and government officials, the origin and implementation of the Stuxnet virus is explored, which is believed to have been a joint effort cyber-attack between the United States and the Israeli government with the intention of crashing the Iranian nuclear program during the Bush administration. As expected, this is conjecture, as no one is willing to go on the record about the computer program. Despite this, the facts presented by the computer expert as well as leaked government documents detail a compelling story which makes it hard not to believe it to be true.

Also explored are Olympic Games (OG) malware program and the Nitro Zeus strategy plan that was created following the aftermath of the Stuxnet virus. I going to admit that this really illuminated me to the possibly of the end of days due to cyber warfare. Before Zero Days, my idea of being hacked was didn’t go any deeper than any your credit card information stolen or possibly some personal photos (i.e. naked selfies) being breached and disseminated. In reality, a successful launch of a computer virus can shut down power grids and irreversibly damage our way of life.

I truly recommend this documentary in order to raise awareness about cyber warfare. Although the film did get a bit long-winded in its discussion about the subject matter, it is for the most part explained in a way that even someone with basic knowledge of computers can follow.

Jeremy Butler is a film school graduate of the International Academy of Design and Technology. He is been writing for Upcomingdiscs since 2012; however, movies have played a big part of his life for much longer. Favorite genres include horror, science fiction/fantasy, and comedy. Favorite movies are V for Vendetta, Boondocks Saints, Kiss Kiss Bang Bang, and The Godfather.
The Comedian Story Of God: Season 1