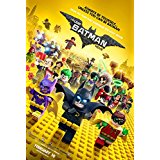 I completely understand if you’re Batman-ed out by now. The Caped Crusader barely had a chance to catch his breath since the end of Christopher Nolan’s landmark superhero trilogy in 2012 and being pressed back into duty to help kickstart Warner Bros.’ budding superhero universe last year. But between those two iterations, we got a glimpse at a fresh, knowingly funny version of a hero that takes himself entirely too seriously. Batman was a scene-stealing supporting player in 2014’s block-buster The Lego Movie, and now he once again takes center stage in a sharp, hilarious, irreverent adventure that celebrates practically every version of the beloved character.

What is there not to love about a rich, powerful, crime fighting genius who still manages to be somewhat relatable due to his lack of superpowers? Batman (voiced by Will Arnett, reprising his role from The Lego Movie) seemingly has it all…except a family to come home to once he’s done saving Gotham City. (I’ll eventually get to the many reasons I love The Lego Batman Movie, but the fact that it doesn’t make us sit through the death of Bruce Wayne’s parents for the umpteenth time is near the top of the list.)

Batman’s world is rocked by the arrival of new police commissioner Barbara Gordon (Rosario Dawson), who wants to team up with Batman to fight crime. During an earlier clash with The Joker (Zach Galifianakis), Batman wounded his supposed nemesis’ feelings by stating that Joker wasn’t his greatest enemy and that they meant nothing to each other. The Joker subsequently hatches a plan to prove Batman wrong, which leads to the Caped Crusader acting harshly and unleashing an all-star roster of baddies that pushes Gotham’s usual roster of villains to the sidelines. Will Batman learn to rely on Barbara, his loyal butler/guardian Alfred (Ralph Fiennes) and (oh yeah!) the cheerful orphan he adopted on a whim named Dick Greyson (Michael Cera) in time to save the day?

I’m pretty sure we all know the answer to that question, but The Lego Batman Movie has a deliriously fun time getting there. Lego Movie directors Phil Lord and Chris Miller have stepped aside to try and make the Kessel Run in less than 12 parsecs. In their place, we get Robot Chicken director Chris McKay, who knows something about unearthing the silly side of iconic characters by fusing them with modern pop culture.

The Lego Batman Movie has five credited screenwriters, and you can certainly feel the way that many disparate gags and ideas from a handful of different people were incorporated into the finished product. (I’m not sure why Michael Jackson’s “Man in the Mirror” gets such prominent play, but it works here.) The film nods to almost every aspect of the Bat-universe, with the 1960s Adam West version getting some particularly loving mentions. (Four magical words: Shark Repellant Bat Spray.) Even the much, much lesser known members of Batman’s rogues gallery get their moment to shine. (Condiment King, shout out!)

But it’s all held together by a surprisingly simple question: what does it mean to be Batman? According to The Lego Batman Movie, it means that life has little purpose unless you’re punching bad guys and the worst thing that can possibly happen is once again losing people you care about. The film also fleshes out the co-dependent nature of Batman and Joker’s relationship that Nolan alluded to at the end of The Dark Knight. Being a superhero is a lonely gig — Superman’s haven is called the Fortress of Solitude, for pete’s sake! — but someboy’s gotta do it.