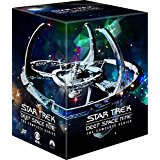 “It is the unknown that defines our existence. We are constantly searching, not just for answers to our questions, but for new questions. We are explorers. We explore our lives day by day, and we explore the galaxy trying to expand the boundaries of our knowledge. And that is why I am here: not to conquer you with weapons or ideas, but to coexist and learn.”

No Star Trek series has divided Trek fans as much as the 1993 release of Star Trek: Deep Space Nine. It had been six years since the franchise had been resurrected on television with The Next Generation. Next Generation won over the Trek community and had enjoyed a pretty solid run. But it was coming to an end soon, and the folks at Paramount didn’t want to see the ratings train leave the station quite so soon. Creator Gene Roddenberry died two years earlier, and this would be the first entry into the franchise that was not guided by his own hand. Rick Berman and Michael Piller, who had both worked on Next Generation, were tapped to create the next true generation of Star Trek television shows. The result was Deep Space Nine. While it would be introduced with Patrick Stewart’s beloved Captain Jean-Luc Picard, it would lead to unrest in the fan-base and accusations that Roddenberry’s dream had been jettisoned from the franchise. I must admit that I never really warmed up to the show at the time. It was only later through DVD releases that I was able to watch the show with both distance and some context and I truly started to appreciate the show. It still doesn’t rank as one of my favorites, but having an opportunity to see it all as a 7-year project, I grew to enjoy many of the characters and even some of the stories. Deep Space Nine introduced the long-form story arc to the franchise, and that certainly can be better appreciated by having it all unfold before you as episode immediately follows episode. It’s an opportunity you now have with the release of the entire series in one collection.

The series was indeed a major departure from the concepts most fans considered Star Trek. For the first and only time, a series did not involve the explorations of a starship. Deep Space Nine was a space station that had long been occupied by the invading force of Cardassians (no Kim here) who had controlled the planet Bajor for years. Starfleet has negotiated a retreat by the occupying forces and freedom for the Bajorans. It appeared to be a worthless station in a non-strategic location in space. But just as the Cardassians are leaving, a wormhole appears and becomes the first known stable wormhole allowing transportation to the distant Gamma Quadrant. Suddenly it’s a valuable station, and Starfleet has been asked to maintain a presence to help the newly freed Bajorans protect and utilize their new treasure.

Enter Commander Sisko, played by Avery Brooks. He has been ordered to take command of that Starfleet presence and work with the Bajoran representative Kira Nerys, played by Nana Visitor. He doesn’t want the job and feels even more hostile when he has to deal with Captain Picard of The Enterprise. Sisko lost is wife in the battle with the Borg that was led by Picard’s Locutus incarnation as an agent of the Borg. Now he brings his teenage son Jake (Lofton) to the station where he falls under the “bad” influence of a Ferengi boy named Rom (Grodenchik). The crew of the space station includes another member of The Enterprise crew. Chief Miles O’Brien (Meaney) takes on the role of Chief Engineer. Security on the station is handled by a mysterious shapeshifter named Odo, played by Rene Auberjonois. He believes he is the last of his kind and sleeps in liquid form in a bucket. His nemesis is the Ferengi bar owner Quark, played by Armin Shimerman. Quark always has some scheme going on, and the two share one of the most popular relationships in Star Trek history. Alexander Siddig is the station’s Starfleet Medical Officer, Dr. Julian Bashir, who volunteered for the gig because he thought he wanted the adventure of the far-off frontier. He was constantly trying to court the station’s science officer, Jadzia Dax. This was one of the more interesting characters on the franchise. Introduced in an episode of Next Generation, the Trill are made up of both a humanoid host and a symbiotic “creature” that is quite long-lived. Sisko knew Dax in an earlier form when “he” was a fellow starfleet officer. It takes a while for Sisko to adapt to the young female version of the friend he refers to as “Old Man”. When actress Terry Farrell finally left the show, a new actress took over as a new incarnation of the “old man”. After Next Generation was finished, Michael Dorn made big news by bringing his Klingon Lt. Worf to the station. In an attempt to fix the lack-of-a-starship problem, the show also introduced the USS Defiant as a ship usually commanded by Worf and used to explore the Gamma Quadrant.

Even without doing a lot of exploring, there was plenty of fodder for stories on the show. The religious culture of the Bajorans became a big source of stories, as was Kira’s history in the Bajoran resistance. Sisko often found himself playing the middleman between Cardassians and Bajoran interests. Oddly, the Kira character was not originally created as a new one. Michelle Forbes was asked to bring her Ensign Ro to the new series. She turned it down, and a character with much the same rebellious nature was created. The station was never in good repair, which kept O’Brien busy, as did his wife and young child. New civilizations were introduced through the unexplored regions of the Gamma Quadrant, and eventually the station would find itself involved in a seasons-long war with a group called The Dominion. It would lead to the largest story arc in Trek television history. Even Q took the time to visit the station, offering another one of John de Lancie’s wonderful performances.

The series continued the tradition set by Next Generation and ran seven years with a total of 173 episodes. It’s a formula that would also be followed by Voyager. The DVDs have been out there for some time, but those individual collections were costly. Many fans opted to hold off until they could get them at a discount. If you’re still waiting, this is the deal of the 24th century. All of the DVD features have been included here, so there’s plenty of material to keep you happy for a long time. I hear some of you guys grousing over the money you spent over the years to keep your Trek collection current. “A true warrior has no need to exaggerate his feats.”

Gino Sassani is a member of the Southeastern Film Critic's Association (SEFCA). He is a film and television critic based in Tampa, Florida. He's also the Senior Editor here at Upcomingdiscs. Gino started reviewing films in the early 1990's as a segment of his local television show Focus. He's an award-winning recording artist for Omega Records. Gino is currently working on his 8th album Merchants & Mercenaries. Gino took over Upcomingdiscs Dec 1, 2008. He works out of a home theater he calls The Reel World. Favorite films: The Godfather, The Godfather Part II, The Body Snatcher (Val Lewton film with Karloff and Lugosi, not the pod people film), Unforgiven, Gladiator, The Lion King, Jaws, Son Of Frankenstein, The Good, The Bad And The Ugly, and Monsters, Inc.
The Crooked Man Arrival (UHD Blu-ray) (4K)