Posted in: No Huddle by Jeremy Butler on February 15th, 2017 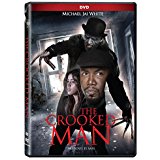 Have no fear, Michael Jai White is here, in a role that is outside the norm that has been established for him in recent years. You know the one, kicking ass and taking names, usually without a shirt on. However, in The Crooked Man, a horror film, he is doing quite the opposite, and also unlike him, he is not the focal point, as the story focuses on a young girl named Olivia, who finds herself not only framed for her friend’s death at the hands of the Crooked Man, but institutionalized when no one believes her story. An intriguing premise, but a bit long in the tooth, if you know what I mean. That said, it does earn the title of best television movie of 2017 for me, but we shall see how long its reign lasts, as we are only two months into the year.

Olivia Shaw’s life changed the night of a sleepover when she and her friends recited a rhyme, which called a murderous apparition known as the Crooked Man.  Framed for the murder of one of her friends, Olivia quickly tells the truth about what happened, only for her claims to fall on deaf ears. Confined to a psychiatric facility for six years, the murders stop, quickly putting an end to the Crooked Man’s murder, furthering public opinion that she is responsible. Upon her return to her hometown, she finds herself ostracized by her former friends, who too believe that she killed their friend, as well as the victim of vandalism by the townspeople.

When the murders resume, Olivia finds herself under suspicion again. With people dying and only aided by the brother of one of her former friends, she must solve the mystery of why the malevolent spirit has returned and how to stop I,t but she becomes its next target.

So as I said, I was intrigued from the very beginning due to the intriguing premise. However, I did find my interest waning as the monster attacks grew more and more redundant. I understand more multiple attacks to establish the pattern; however, after the third instance, the attacks become trivial. In my opinion, a reduction in the cast would have gone a long way towards avoiding this. It is rare that I say this, but I believe the cast was slightly over-strengthened. I can think of a couple of cast members who were unnecessary to the overall plot, such as the babysitter/musician, and dare I say, Michael Jai White. I know, I know, I am shocked to be saying it myself, but if I’m being honest, he is very underutilized in his role. I don’t mean to typecast, but I expected him to play a more active role in fighting the evil than he did.

Despite these issues, The Crooked Man possessed an engaging storyline and a compelling lead who did an awesome job driving the plot forward.  I found myself rooting for this young woman who had been dealt a crummy hand, but despite the adversity of a homicidal spirit and the opinions of those closest to her, she remains determined to right the wrongs of her past and save as many people as she can. Hats off to Angelique Rivera, who was without question the driving force behind the success of the project in my opinion. Acting aside, a good horror movie must also have a good storyline, and this movie definitely applies. I won’t call it scary, but I found it moderately suspenseful, and the special effects were among some of the best that I’ve seen in a television movie, specifically, the phantasm effect utilized for the appearance of the Crooked Man, which made him feel more intangible and lent credence to his vulnerabilities.

I would definitely recommend this film to the horror movie crowd, or anyone who is looking to scare their girlfriends. Seasoned veterans of the horror genre are unlikely to be intimidated by the film, but I do believe that they will find an intriguing tale that manages to escape the perils of becoming cliché. Plus, Michael Jai White is in it. Even if he is being underutilized, it’s still always good to see him.

Jeremy Butler is a film school graduate of the International Academy of Design and Technology. He is been writing for Upcomingdiscs since 2012; however, movies have played a big part of his life for much longer. Favorite genres include horror, science fiction/fantasy, and comedy. Favorite movies are V for Vendetta, Boondocks Saints, Kiss Kiss Bang Bang, and The Godfather.
Contest: Win Quarry: The Complete First Season On DVD From HBO Star Trek: Deep Space Nine: The Complete Series