Posted in: The Reel World by Brent Lorentson on February 20th, 2017 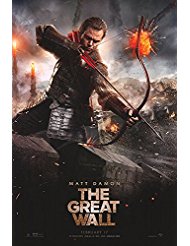 It’s kind of a big deal when discussing the film The Great Wall to mention that it is the most expensive Chinese film made to date.  With an estimated budget of a $150 million, I can understand the stunt casting of putting Matt Damon in the film that takes place during the Great Wall’s construction.  It’s quite simple; Matt Damon is an international star, and he puts people in seats.  What’s more surprising is that at one time Edward Zwick was on board to direct, but eventually that position would be passed on to  Yimou Zhang. For those unfamiliar with Zhang, he’s responsible for such martial arts epics Hero and House of Flying Daggers, and for Zhang this would be his first Hollywood feature.  To bring another factoid to the table, the studio behind the film is Legendary East, the Chinese branch of Legendary, the studio that is responsible for such monster epics as Pacific Rim, Godzilla, and Kong: Skull Island; basically they are attempting to become the American version of TOHO, the studio that originally churned out all the hit giant monster films of the 50’s to today.  What this all means is, everyone on board this project was expecting this film to be a monster (pun intended) smash at the global box office. Sadly, this was a giant swing, but not quite a miss, because the film is actually pretty fun.
The film opens up with a band of mercenaries on the run; they are on a quest to find “black powder” and return home with it. Right from the start we are given some beautiful aerial cinematography as the camera sweeps over the landscape to capture this opening horse chase.  Everything about this opening sequence just screams epic, and it quickly elevated my hopes on what would soon follow.

During the night, the group of mercenaries are attacked by a dark creature that no one seems to get a good look at, but in the process of the struggle, William (Matt Damon) manages to sever the creature’s arm, and he keeps it to identify later. Later turns out to be the next day once William and his Spanish partner Tovar (Pedro Pascal) are separated by their group and are taken prisoner at the foot of the Wall.  The Wall is under the protection of The Order, a group of soldiers that have been trained to protect The Wall for centuries.  But protect it from what?

We learn early on about the threat to The Great Wall, and while I’m all for a movie that doesn’t waste time getting to the action, the film could have used a little more buildup rather than see the first wave of attack by the monsters inside the first 15 minutes.  This is far from being a slow burn or anything to be mistaken as a tension builder; no, instead we get the monsters attacking, and this is something that continues in intervals throughout the film with little breaks between to offer up what sort of resembles a storyline.

From the start we see tension between Commander Lin (Tian Jing) who would prefer to just have William and his sidekick killed, but with an attack from the hordes of monsters, well, she manages to focus on her priorities.  It’s in a wave of attacks that William manages to get loose and helps in the fight against the monsters.  Basically William may as well be ‘The Great White Mythical Archer” who saves China, because, well, that’s what he basically is.  Robin Hood would have nothing on this character that we see a dozen times too many fire off arrows in slow motion with impossible deadeye accuracy.  Had William just been a character who helps in the fight I don’t believe there would be so much backlash about this character, and as much as I like Matt Damon, I understand why so many people take offense to this casting or simply how much this character has an influence on the film.  You have Andy Lau playing the strategist Wang, and despite the amount of screen time he gets, I just feel considering how much of an icon Lau is to Hong Kong cinema, perhaps he could have had a larger role as the film’s hero.  But again, I get it; it’s about filling the seats with an American-named actor, as a few people compared Damon’s casting to Raymond Burr being cast in the American version of Godzilla.

Just what are these monsters?  Well, they are Tao Tei that live in the mountains and hibernate for 60 years at a time.  Personally I thought the monsters were just oversized iguanas, but they do have a vicious streak to them.  These creatures are not only large and mean, but there are a lot of them. I’m talking thousands of these four-legged beasts.  They do appear a little too CGI for my taste, but they still work as effective creatures that we see maim and kill soldiers constantly in the film.  There is a beautifully choreographed attack while The Wall is under the cover of fog, and I feel this is the film’s strongest sequence, but even this sequence has far too many slow-mo shots. Seriously, the amount of slow-motion action shots in this film is beyond excessive, and it reaches points of feeling like lazy filmmaking.

This film was simply too big for its own good.  This is a solid B monster film that is trying to be something it is not.  When the film attempts to build relationships, it simply falls flat and gets to the point of being boring.  Just as bad, the attacks on the Wall start to become so frequent they lack any tension, despite all the beautiful cinematography and fight choreography.  Cut this down to a leaner 90-minute film, and I think you have a great monster film that will have audiences enjoying the heck out of all the cheesy fun that is on display.  Despite my harsh words, I do think this is a really fun movie, but there was a better film here had more adjustments been made.

Brent Lorentson is a horror writer and film critic based out of Tampa, Florida. With a BA in Digital Film, he co-wrote and co-directed Scavenger Hunt. His short stories have appeared in various horror anthologies. In 2019 his short script Fertile Blood will be a part of the anthology horror film Slumber Party. He is currently working on his first novel A Dark and Secret Place set to be released in late 2019. Favorite Films: Taxi Driver, Fight Club, I Saw the Devil, The Wild Bunch, Dawn of the Dead, A Clockwork Orange, Pulp Fiction, Heathers, The Monster Squad, and High Fidelity.
American Pastoral (Blu-ray) Tuesday Round Up: February 21, 2017