Posted in: Disc Reviews by Brent Lorentson on February 20th, 2017 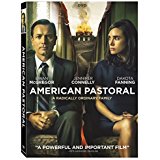 Ewan McGregor has had an interesting career in front of the camera; he’s gone from playing a heroin addict (Trainspotting), to being a Jedi and several roles that just about make him impossible to typecast. With his new film, McGregor is doing double duty by also helming the film as director for the first time.  When I first heard about McGregor taking on American Pastoral, based on the book of the same name by Philip Roth, I was worried that perhaps he had bitten off a bit more than he could handle with his first time at bat.  What’s surprising is how relevant the film is at this point in time as the country is so divided, and because of this it adds a new perspective to the film.

The story is told with narration from the perspective of Nathan Zuckerman (David Strathairn), who has returned to his hometown to celebrate his high school reunion.  Nathan has come back to reflect on his old memories, most of which involve the high school star of his day, Seymour Levov, or as the town affectionately call him, Swede.

The film flashes back to a time where we meet Swede (McGregor) as he is out of school and is attempting to gain his father’s approval to marry his girlfriend, Dawn (Jennifer Connelly), a former beauty queen.  It’s easy to see how people would have envied the Swede; he seemed to be living the perfect American dream life where everything just conveniently seemed to work out for the best as they move out to the country to have a family.  For most when it comes to raising a family, things are ideally supposed to improve, but for the Levov family it only begins to spiral downward.

The majority of the film plays out during the civil rights movement while the Levovs’ daughter, Merry (Dakota Fanning) transitions into a rebellious teenager.  As the nation seems to be crumbling, so does the perfect image of the Swede’s home life.  Even as the Swede’s life seems to begin to unhinge, he somehow manages to keep an upbeat attitude.  Merry isn’t simply rebellious, but to almost be fair she pretty much transitions into the daughter from hell.  Fanning really does a remarkable job by not taking this character so far over the deep end where as an audience we never want to write her off.  When it comes time that we see a building in their town explode we are given the impression that Merry is the culprit, but there is enough doubt left behind that perhaps her militant attitude hasn’t escalated to murder.

While the film progresses, we bear witness to the crumbling of the Levov family as their daughter is on the run with the FBI in pursuit.  Connelly delivers a great performance as we watch her grow all the more unhinged, but then there is McGregor…When you have to juggle both working in front of the camera and being in the director’s chair, you have to worry about the balance you are giving the position.  Had another director been helming the film and he could simply focus on his performance, I feel this could have been something special for McGregor, but as it stands I just didn’t feel he pushed himself as far as he needed to go.

Filling out the cast, there is Peter Riegert, who plays Swede’s judgmental Jewish father who manages to toe the line nicely of being a sweet old family man to just being angry and racist.  Then there is Swede’s loyal secretary, Vicky (Uzo Aduba), who I feel was a bit underused, but she makes the best of every scene we get to see her in.

The heart of the film is about a father’s love for his daughter and how he refuses to give up on her despite all he seems to lose in the process.  It’s a film that is filled with moments that many parents will be able to relate to, but is also filled with the nightmare scenario that many parents pray they will never have to confront.  On the surface the family conflict is something that an audience can easily relate to, though we may not agree with all the decisions that are made along the way.  The question lingers for a large portion of the film about Merry’s involvement in the bombing that results in the death of a man. How the family adjusts to this reality is troubling at times but remains grounded, rather than sticking with the audience-friendly route.

While the film didn’t wow me as the trailer teased me with the possibility, there is a lot of material going on that I found engaging.  There is an odd sexual context that seems to be going on here that plays with the morals of the lead characters of the film; while it’s something that seems to always be there, I wish it was explored more.  Art can be dangerous, and I think it’s the film’s refusal to take a step closer to the dark sexuality on display that restrained this from being more than just a casual film viewing experience.

American Pastoral is presented in the aspect ratio 2.37:1.  The 1080p image is arrived at with an AVC MPEG-4 codec at an average of 32mbps.  I really enjoyed the look of this film. There are several landscape shots at the Levov family home that evoke the feeling that you are viewing a still frame you would find hanging in a museum.  The family home and farm are filled with greens and blues that capture the beautiful nature around them. The contrast in the city as it’s filled with blacks and browns that have very clear color separation.  This is a very clean and crisp film with a sharp look to it; the cinematography by Martin Ruhe makes this such a stunning film to experience.

The DTS-HD Master Audio 5.1 track is not all that remarkable; the film is mostly dialog-driven, and it is all presented cleanly and clearly.  There is some ambient noise that comes through during most scenes, but there’s nothing I’d call impressive going on here.

Commentary with Ewan McGregor: I’m a fan of accents, and I really enjoyed listening to the insight McGregor brings to this track, even little tidbits about how odd it is to direct a scene he is acting alone in.  There is a lot of information here and it never feels bogged down or boring.

American Pastoral: Adapting and American Classic (28:02) A in depth look about the process of not just getting the film made but about adapting the work of fiction and condensing it to be a film.  This is a nice feature that readers can enjoy that gets into the decision making process of why scenes from books don’t make it into a film.

Making the American Dream: (17:38) Here we get insight into the look of the film and the effort into capturing the time period of the film.

Despite the ensemble of solid performances and the film’s relevance to today’s tense political and racial climate, this is a film I just feel never reaches its full potential.  It’s a film I would recommend, but I do so by saying to keep your expectations from getting too high, and you may just come away enjoying the film.  Hopefully the next time we see McGregor behind the camera, we can see him attempt something a little more fun…Trainspotting 3 perhaps?

Brent Lorentson is a horror writer and film critic based out of Tampa, Florida. With a BA in Digital Film, he co-wrote and co-directed Scavenger Hunt. His short stories have appeared in various horror anthologies. In 2019 his short script Fertile Blood will be a part of the anthology horror film Slumber Party. He is currently working on his first novel A Dark and Secret Place set to be released in late 2019. Favorite Films: Taxi Driver, Fight Club, I Saw the Devil, The Wild Bunch, Dawn of the Dead, A Clockwork Orange, Pulp Fiction, Heathers, The Monster Squad, and High Fidelity.
Arrival (UHD Blu-ray) (4K) The Great Wall