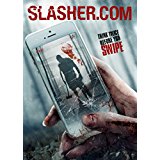 Contemporary horror films are in a really strange position. Gone are the days of the formulaic slasher flick or creature feature. Today we have filmmakers who only seem interested in breaking genre conventions in order to try something new and be deemed “relevant.” As  a result, we are treated to an intellectually-driven horror renaissance with films such as It Follows or The Babadook, or we must sit through the onslaught of torture-porn-infused sequels to 70’s and 80’s classics such as Evil Dead (2013), I Spit on Your Grave (2010), or The Last House on the Left (2009). If the filmmaker is trying to break genre conventions, it is important to note that they do not always succeed, as is the case with Slasher.com.

Opening the film with what seems to be a great social commentary regarding modern dating apps such as Tinder, Slasher.com offers a reasonable plot: some deviant is prowling the net, preying on the helpless women of St. Louis, Missouri. Then that concept just sort of changes. After about five minutes of news stories, the film clumsily takes you away from that concept via a blossoming relationship between a young couple who just met. In an effort to make it a “first date to remember,” they rent a cabin somewhere in the backwoods of Missouri. Their experience becomes more and more disturbing as you learn more about their creepy hosts. But what of the online dating killer? He comes back, but in a way that fails to surprise.

What bothers me the most about this film is it had enough positive quirks to really enjoy, but holistically, I couldn’t bring myself to enjoy it. It’s as if the fantastic conceptual idea was lost somewhere within the production, and a lot of ideas were replaced or just outright omitted. There was enough of the disturbing story, but like I said, that ends with concept. Writing, acting, editing; these things work almost directly against what made me enjoy the film in the first place.

So what is there to enjoy? The concept of a slasher prowling the modern dating scene and the character affectionately known through the film as “Momma” (played by Jewel Shepard) I have yet to see a very exciting thriller involving modern dating apps; however, it is one of the few subgenres I actually seek out. You can tell Slasher.com is a low-budget production from the get-go, but I can stomach a small budget if I like the story. However, the theme of online dating occupies about 8-10 minutes of actual screen time, and that is a generous estimation. The majority of the film involves the other fantastic concept, “Momma.” She is an older woman (late 50s), and she is just unabashedly infatuated with the male protagonist. That dynamic sets up a great tone of unease, and it is only strengthened by her obsession with a silver spoon she uses to feed her newfound crush (as well as other unsavory things he does not know about). Her character is disgusting and creepy, but is hardly a stand-in for the plot that was promised: a dating app serial killer. So there are two very strong concepts that never blend together fighting for the spotlight. Basically, it feels like you are watching two movies, but one just gives up on trying to get your attention.

Where writing disappoints, it is only made worse by amateur actors and slow edits. Realistically, the acting isn’t that bad, but it isn’t good enough to allow me to ignore the writing. In addition, many scene transitions feel awkward given the amount of time that the camera lingers on unnecessary actions. Again, this is a very forgivable transgression, but if I’m already upset with the battling concepts, it just adds fuel to the fire. If this film were only about “Momma,” or only about a dating app killer, it could have at least two stars. Unfortunately, the two rather interesting concepts coexist, and your enjoyment becomes lost in the ether.

Overall, the movie just doesn’t know what it wants to be. I saw borrowed elements from The Texas Chainsaw Massacre, Hostel, and even I Spit on Your Grave, but what is borrowed becomes inconsequential if what makes your film original is conflicting. The film spends way too much time trying to make you feel uncomfortable or try to “surprise” you with its twist ending, when it should have taken care to intelligently weave dating apps and “Momma” into a more cohesive whole. Instead, you spend about an hour and a half watching two films that culminate with a hail-Mary plot twist in the opposite direction of the end zone.

Tuesday Round Up: March 7, 2017 Star Trek: Voyager – The Complete Series